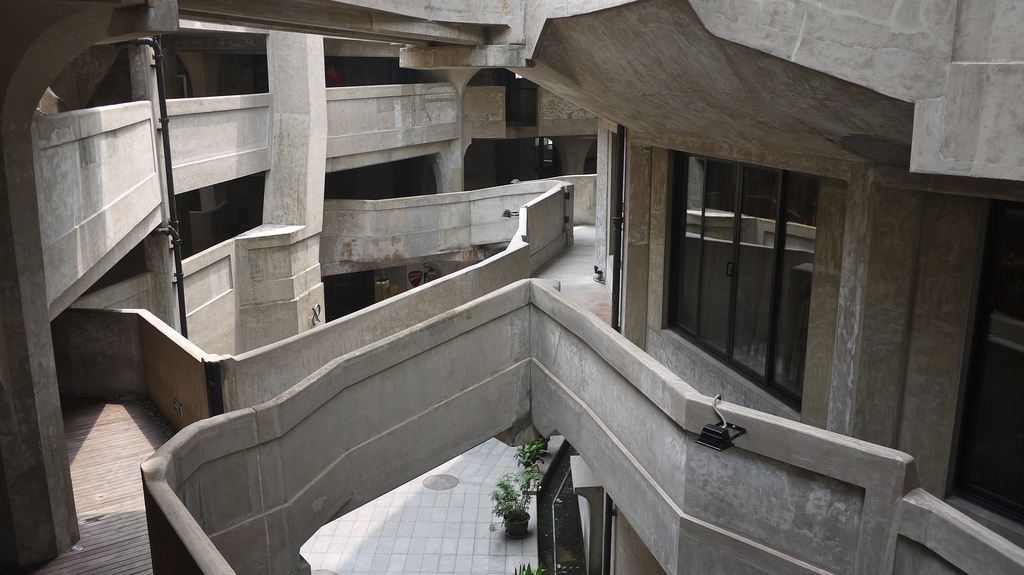 The words ‘art deco’, ‘abattoir’, and ‘Shanghai’ are not ones you usually find in the same sentence but on a hot summers morning in China’s second most populous city I found myself in one of the most curious architectural relics you could imagine; a 1930’s former slaughterhouse beautifully crafted from concrete in a style most unbecoming of China’s usual mausoleums to the uncouth.

Located in the historic Hongkou District, 1933 Shanghai (上海1933老场坊) was built amidst the vibrant urban landscape of pre-communist Shanghai. Designed originally by British architects, and built in 1933 by Chinese developers, the building was originally intended for use as a slaughterhouse but served a number of purposes over the years from medicine factory, and cold storage facility, to its current incarnation as a ‘commercial hub for creative industries’.

Concrete is one of the hardest building materials to use in an aesthetically pleasing way since by its very nature is cold, hard and difficult to mould in unconventional ways. Despite this, the original architect managed to find a way to fulfil its practical mission as an abattoir, yet also incorporate decorative elements such as the ‘flowering columns’ seen above and below.

The building was commissioned by the then Shanghai Municipal Council with the high-quality cement aggregate required to support the load-bearing needs of the building and was imported from the Portsmouth area of the UK. After being abandoned and falling into disrepair the building was extensively restoration in 2008.

Built around a central atrium, which served as the abattoir’s workshops, each floor is connected to an outer shell by a series of interlocking ramps, bridges, and spiral staircases which were designed to control the flow of both people and cattle being processed through the building.

There are 26 ‘air bridges’ of various widths splayed out at different angles, provoking feelings of both confusion and fascination at how it could have been conceived, let alone given birth to. Imagining how it must have been with the sounds of animals being slowly herded through the industrial maze towards their gruesome fate is strangely haunting.

Looking down at the concrete abyss one is reminded of M. C. Escher’s famous drawings of impossible constructs where stairs ascend and descend in an infinite loop. With so many different paths to choose from it’s easy to lose your bearings.

After the RMB100 million restoration you can’t blame people for wanting to make the space earn its keep but it must have been so much nicer before the likes of the ‘Ferrari Owner’s Club’ had moved in. Some of its original charm and mystique has certainly been lost.

The owners seem to be straying down the path of trying to attract the nouveau riche rather than being a cultural centre in the truest form. Poorly constructed ‘design’ shops and overpriced restaurants seem to be permeating what could have otherwise been a very successful urban renewal project.

Despite this, the classic architecture with Art Deco styling and beautiful geometric motifs is well worth a visit and seems to be particularly popular with amateur photographers all searching for the best angles to try to capture this unruly monster.

Strangely enough, I noticed advertisements for couples to get their wedding photo taken here which seemed peculiar to say the least! Still, if you’re looking for something a little different…

Another concrete masterpiece you might like to check out is the University of East Anglia in my hometown of Norwich (UK) whose Grade II listed ‘ziggurat‘ accommodation terraces have become iconic in their own right.

The rough cattle paths almost have the look of a medieval dungeon.