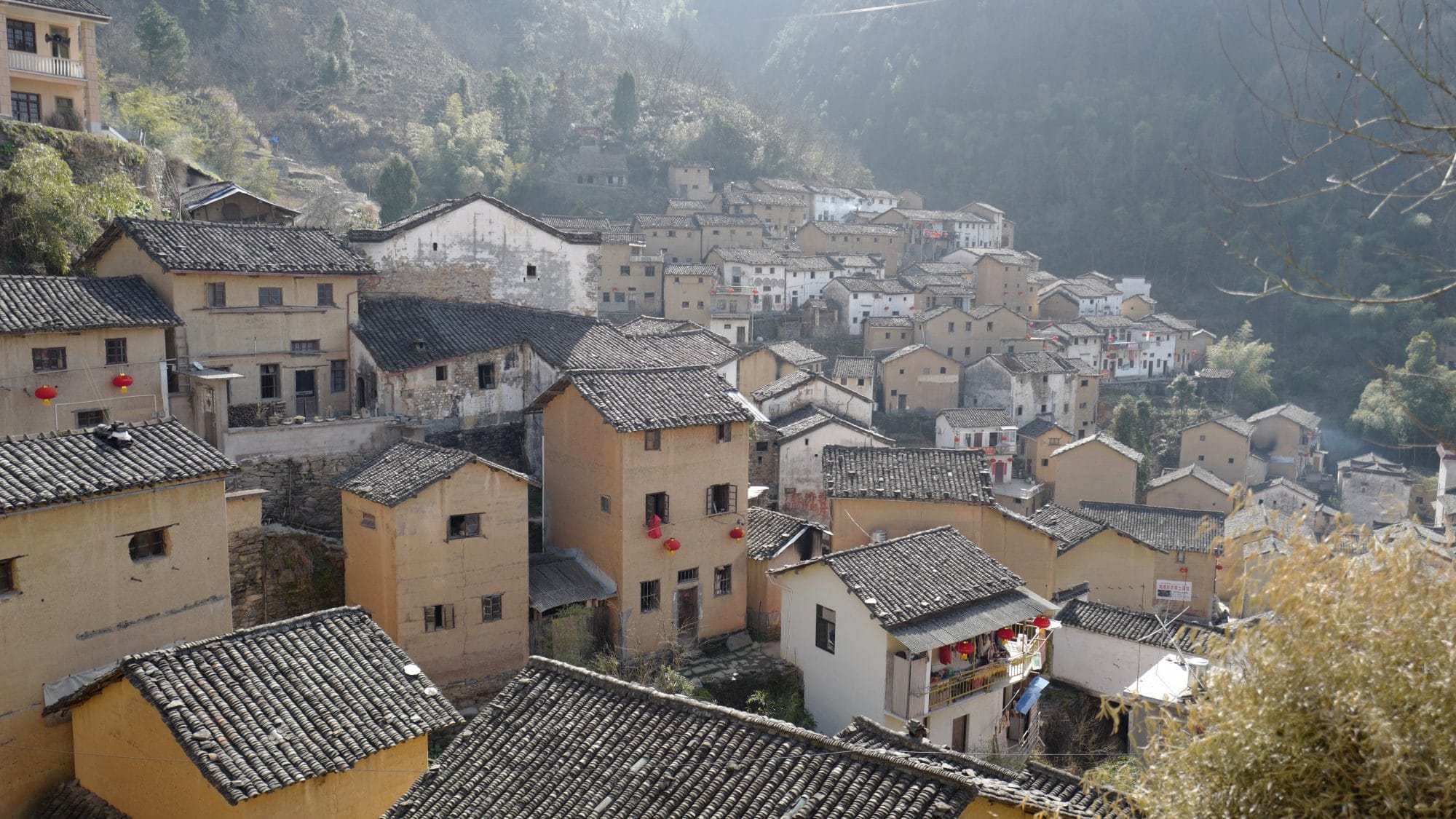 Travel offers its most rewarding experiences when you least expect it and this post is about one such place. Yangchan Village (阳产村) lies on the side of a mountain, accessible only by a single narrow winding road which our driver navigated at speeds which made us pray that we’d not meet anybody coming in the opposite direction.

While Huizhou is famous for its white-washed stone buildings, here nearly all the homes are made of simple wattle and daub construction, a reflection of the construction materials that were available nearby and the low income of the farmers who lived here.

Looking across the valley through the haze of the early morning sun, the burnt yellow walls of the buildings with their small windows and grey tiled roofs provided a panorama, unlike anything I had seen in China before.

The village is arranged on terraced levels, with neat rows of simple buildings sitting alongside small fields tended to by the few remaining residents. Due to the isolated location of the village, the government relocated most of the residents to nearby cities some years ago.

We wandered through the village, transfixed by the earthen buildings against the mountainous backdrop and the fact that such a place has managed to survive.

Judging by the stacks of wood piled outside many houses and the blackened walls, the primary source of fuel remains trees from the surrounding mountainside.

Walking through the empty streets past all the sleeping buildings I started to develop the feeling of a slow-motion tragedy playing out in front of us. Without some serious upkeep, they might not be around much longer. Given the basic living conditions, there isn’t much to keep young people here either.

We passed an old lady sitting outside her home looking rather forlorn, her daughter or granddaughter helping with the cooking nearby. It’s hard to put oneself in the shoes of someone who has lived through the major transitions of recent Chinese history and is ending their days in a hometown which is a shadow of its former self.

It’s rare when travelling to come across somewhere that is so utterly mesmerising in its natural unspoilt beauty yet virtually unheard of. I feel a sense of trepidation about sharing, less it becomes overrun with tourists, but perhaps they are the only chance for saving this hidden gem.