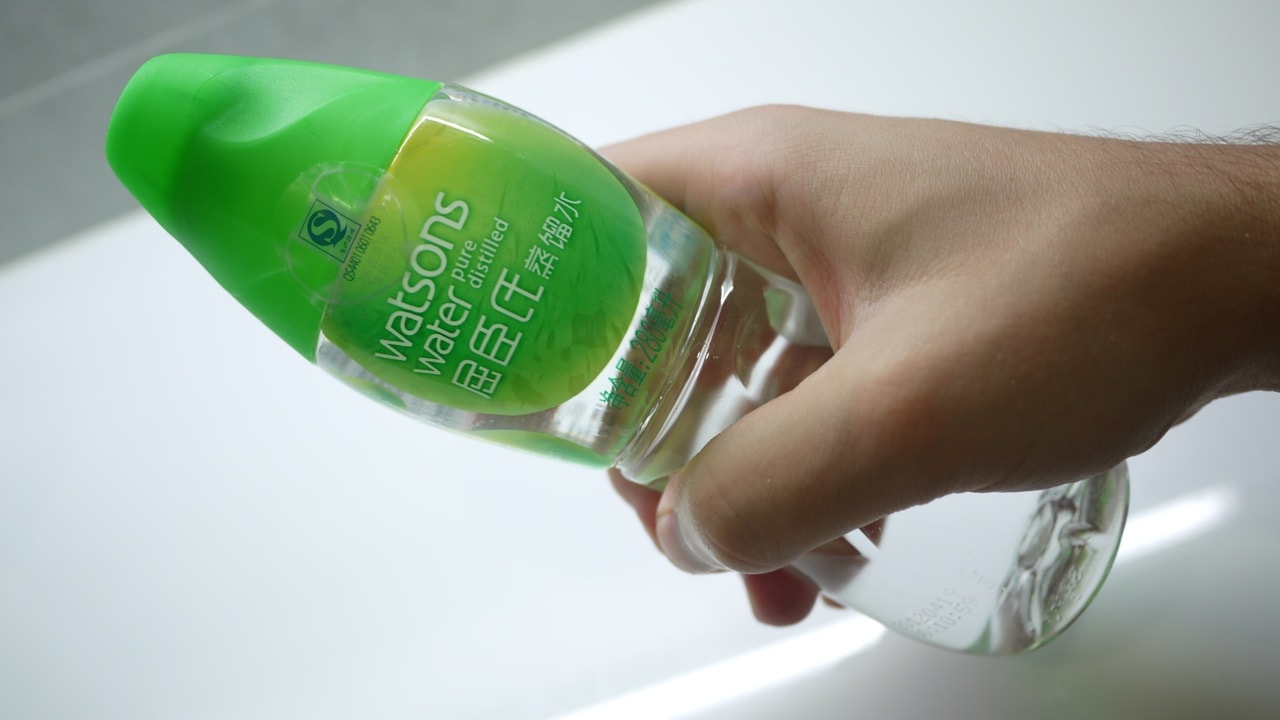 Bottled water has never been an environmentally friendly way of consuming our most precious necessity but its convenience has people buying it in enormous quantities every day, especially in countries where you can’t drink what comes out of the tap you’re often left with little other choice.

In Hong Kong, the most popular local brand is Watsons Water (屈臣氏蒸餾水),  sold at 7/11 and supermarkets everywhere, and owned by business magnate Li Ka-shing (side note: his business interests are so extensive it’s literally impossible to live in HK without putting money in his pocket). Hongkongese seem to be very particular about choosing local brands – just ask anyone what brand of tissues they buy!

The distinctive-looking bottles with their curvaceous body and green/blue caps were designed by Freeman Lau who won an award for its creation:

“I didn’t want it to be just a bottle, but something that represents a lifestyle. How we drink water shouldn’t be the same as putting gas in a car. We should enjoy the process, and I think the bottle should have a nice outline, be easy to grip and have a cap that can be used as a cup.”

While purporting to be an environmental advocate, I’m not so sure…

Although the bottle looks pretty, horrifying its green cap hides beneath it a normal screw top lid which is held in place by moulded clips – a huge waste of plastic for something which is guaranteed to be thrown away shortly after it is bought. To me, this shows a complete failure of responsible design and a lack of consideration for environmental issues.

Hong Kong already has a poor recycling record for plastics (which is harder to recycle than metal, paper or glass) and every day more than a million bottles are dumped into landfill sites. Around 66% of recyclable plastic is recovered though, with the majority of it sent to mainland China for processing (source).

It would seem that there is a responsibility on all sides to solve these issues – manufacturers like Watsons need to reduce unnecessary packaging and design their bottles for recycling/repeat use, consumers need to change their habits, and governments need to put in place more effective recycling schemes and legislation. Until such a time the only thing that can be done is to avoid buying bottled water wherever possible.

More information about plastic recycling in Hong Kong and in general can be found in the videos below: