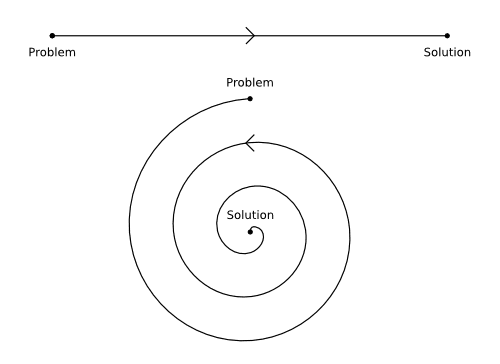 When it comes to solving problems and finding solutions I’ve noticed something peculiar/particular about the Chinese mindset which I’ve been trying to articulate for some time. I don’t claim to be an anthropologist or anything more than a curious observer of life but for what it’s worth here’s my theory…

The western way of problem-solving is usually fairly direct and focused. We articulate a problem and then define a solution with all the steps which are needed to be taken to reach the end goal. We also generally appreciate constructive criticism and embrace suggestions from anyone who has a good idea regardless of their position within a hierarchy.

The Chinese seem to take a rather different approach. Instead of tackling a problem head-on, they will talk around it in circle-like discussions until a mutually agreeable solution is found. This seems to be partly about maintaining “face” (Mianzi) and not upsetting anyone by being indirect whilst also allowing people to steer a conversation in a direction of their choosing. The waters get even more muddied because even after you’ve agreed on a course of action verbally the likelihood of the other party changing direction without warning is still possible (hence being very specific is crucial).

To give an example three people asked a member of my team a similar question at different times. He gave each person a different answer each tailored to what they wanted to hear. Chinese rarely say no even if that’s what they’re thinking so learning to mind-read is a skill well worth investing time in! I’m sure this is why many attempts by foreign companies to enter China fail so spectacularly.

Of course, it’s not always as black and white as I’ve made it out to be above; these are just general trends observed during my time in China so far. I’ve started reading a book called “Think Like Chinese” which provides some illuminating insights into how Chinese thinking is wrapped up in their history, Confucian philosophies and language.

Have you had any experiences like this or have tips on how to deal with them?