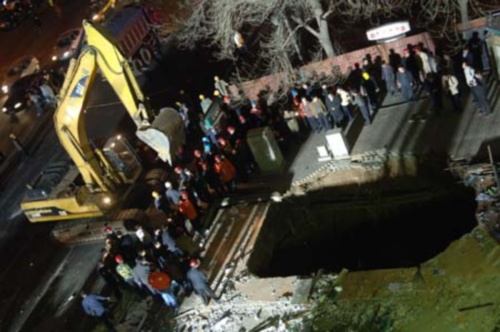 On Wednesday morning the underground subway station, which was under construction, next to my hotel (in the Haidian district) collapsed trapping six migrant workers who have still not been recovered as of today (Friday). Instead of alerting the rescue authorities the contractor apparently tried to cover it up by sealing the site and confiscating the remaining workers’ mobile phones, only reporting the incident 8 hours later.

Experts fear there is little chance that those trapped have survived and although there will no doubt be an investigation it calls into question again whether safety is being sacrificed in order to speed up construction in time for the 2008 Olympics. Beijing plans to add 84 km of new subway lines by August next year.

“The Beijing organizing committee for the 2008 Games said recently that none of the tens of thousands of workers had died during the construction of Olympic venues.” This says just about everything you need to know about their transparency, let alone the callousness of the constructors.