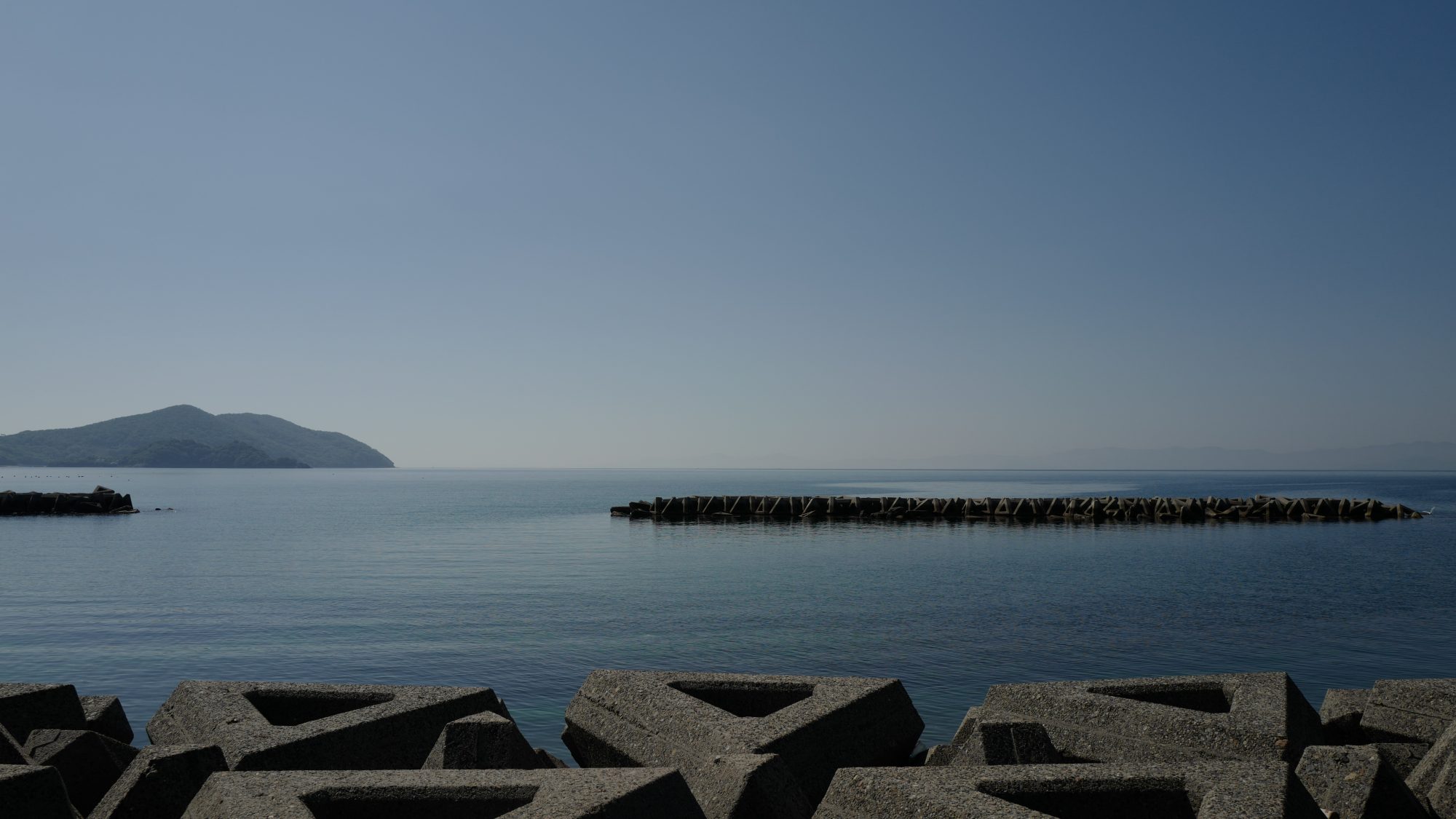 I slept soundly in the well-designed dorm room at Sen Guesthouse where each person has their own “pod” with a bed and small desk at one end. I would have been nice to have stayed here for another day or two.

By now my body clock had adjusted to waking up at dawn so I was up by 6 am and cooked bacon and eggs on toast for breakfast. Nothing better before a long walk!

After saying goodbye to Matthew, Noriko, and their daughter, I continued walking along the road to the end of the peninsula, gazing out over the calm blue sea.

At Tanoura (田浦) there is a small village which you pass through to reach Tano Ura-an (田の浦庵 – 6).

Time permitting, you could continue further south to visit the Twenty-Four Eyes Movie Studio (二十四の瞳映画村) where you can see a Shōwa era village that was originally built as a film set in 1954 for a film of the same name.

The trail scales the mountainside and continues back through the centre of the peninsula. Dead bamboo trees leaning across the trail create interesting geometric patterns. Though the path isn’t well maintained, it’s easy to follow. You’ll want a stick to swipe away all the spider’s webs!

Eventually, you arrive at Horikoshi (堀越), a small coastal village where Horikoshi-an (堀越庵 – 5) is located (look for the enormous dead hornets’ nest they keep there).

Along the shore there a number of beautiful old houses and the view out to sea is stunning though judging by the concrete sea defences, it might get a little rough at times!

Walking back to the main headland and down to Sakate (坂手), I got chatting with the staff at Kannon-ji (観音寺 – 3). Giving the low number of walking pilgrims, let alone foreign ones, a frequently asked question was always “Why are you here?”, said out of genuine curiosity. Without explaining my whole backstory about the Shikoku Pilgrimage, I usually just said that I enjoyed hiking and visiting temples (which in itself is true!).

Again, the pilgrim trail heads back into the hills, on the way passing a bizarre sculpture of a demonic bird creature with sharp teeth and glowing red eyes. I think this was part of the Setouchi Triennale.

Something that I ran into time and again on the trail were the gates designed to keep wild boar and deer out. These were usually held shut with string that you had to untie and retie after passing through. However, there were a few like this which we wired shut and you had to find a way around or over. In this case, I had to shimmy along a wall with a 3 m drop, clinging on to the wire fence, all the while carrying a 10 kg backpack. Not fun!

Back up in the mountains, there were three temples to visit. Kannon-ji Okunoin Hayabusasan (観音寺奥之院 隼山 – 3) was in a state of poor repair, with the main building looking like it wouldn’t last much longer. This wasn’t really surprising given its remote location but did make me think about the enormous cost of maintaining 88 temples with a dwindling population.

Dounsan (洞雲山 – 1) had a funny sign outside it stating “LONG LONG AGO!” In bold letters, referring rather incongruently to the 1,200 years since the pilgrimage route began (allegedly). Inside a large elevated concrete gallery had been built into the rock face.

Goishizan (碁石山 – 2) has a wonderful lookout point next to a Fudō Myō-ō statue (a protective deity). This might look familiar since a photo from this point is used in a lot of promotional posters for the island.

The trail makes its way down to the backstreets of Noma (苗羽) where it passes a large number of traditional buildings. Those belonging to the Marukin Soy Sauce factory were coated in the sweet-smelling residue from the fermentation process.

I stopped at 1 pm for lunch at Setoyoshi (瀬戸よ志), a somen restaurant in Yasuda (安田). Here I bumped into three other Henro who were doing the pilgrimage by taxi. One of them spoke English and we chatted for a few minutes. It was interesting to note that I didn’t see a single other walking pilgrim during my time on the island, only a few groups doing it by car. The food was great and felt well deserved!

Afterwards, I walked to a nearby supermarket to get supplies for dinner and breakfast since I would be staying at a self-catered apartment that evening. Amazingly I bumped into two people I knew – Noriko from Sen Guesthouse and a woman who worked at Gokuraku-ji (極楽寺 – 16) where I had been the previous day. This is what living in a small town must feel like.

My journey then continued inland to Seiken-ji (清見寺 – 21) which was unique in that the temple was connected to a school. After visiting Kinoshita-an (木ノ下庵 – 19) the trail then dips down and heads west along the Nishimura (西村) coast.

I was hoping to stop at Minori Gelato for some ice cream but as had been my poor luck the whole week, it was closed.

At Annyo-ji (安養寺 – 24), I was greeted by two barking dogs who were sheltering from the sun under the temple veranda. A lady came out and in turn barked at her husband (the temple monk) to take them away. She very kindly gave me ice tea and a banana since I probably looked a bit tired and bedraggled by this point in the day.

I noticed that the temple gate had been rebuilt in recent years using a combination of the original wood grafted into new wood using some beautifully intricate joints which could only have been done by a real craftsperson. This must have taken many times longer than just replacing all the wood so I was very impressed. The monk explained to me that it was done when the main hall was rebuilt by the same people.

Seigan-ji (誓願寺庵 – 25) is a short distance away, up a hill which then leads to a stunning bamboo groove, part of which appeared to be commercially managed.

Amida-ji (阿彌陀寺 – 26) was my last stop for the day and to my relief, the stamps were left out for self-service. I had grown a little tired of answering the same questions and was looking forward to getting to my accommodation.

I made it to Olive Park (小豆島オリーブ公園), a working olive grove on the site where the first olives were successfully cultivated in Japan a century ago, around 4.30 pm. The park has been loosely themed around the Hayao Miyazaki film Kiki’s Delivery Service, complete with replica Greek windmill.

The staff looked very bored when I checked into the Olivex Uchinomi (オリベックス うちのみ) lodge that I had booked within the park. Despite this, it was a pretty nice self-contained apartment with room for a whole family.

After taking a shower I walked ten minutes down the hill to “Today is the Day”, a small cafe overlooking the sea. It was golden hour, and the view was sublime. I treated myself to plate of pancakes and a lemon soda. Good food tastes so much better after a long walk.

At 6 pm I walked back up the hill to the large onsen complex next to my lodge. There I had a good soak in the hot baths which is just about the best way to ease aching legs after a long day of walking.

Back in my apartment, I cooked green Thai curry with rice for dinner. Soon after, I was beginning to feel pretty bad with a throbbing headache and extreme fatigue. It felt like heat exhaustion so I drank plenty of water, took some pain killers and then headed to bed early.