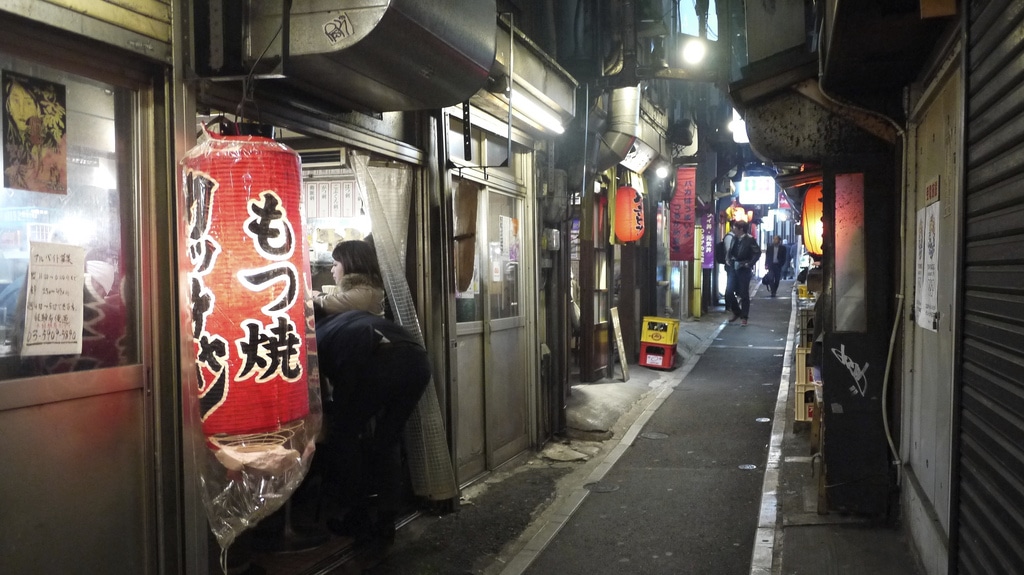 With its futuristic skyscrapers and bright lights, Shinjuku (新宿) presents the archetypal Tokyo that is the face of many a travel guide and movie. And rightly so – to the uninitiated the heady mix of neon and swarms of people is intoxicating.

After spending most of the day walking around Sumida, and the Tokyo Skytree, I came back to Shinjuku and, after navigating one of the station’s 200 or so exits, found myself on the east side amid the rush-hour crowds.

A short distance away I came across the new Bicqlo store which is a mash-up of two Japanese giants – clothes emporium UNIQLO and electronics retailer Bic Camera. If you ever want to buy a pair of socks and a microwave at the same time this is the place to go.

Tucked between the tracks on the west side of Shinjuku Station lies a decidedly less glitzy collection of small eateries and bars known as Memory Lane (Omoide Yokocho) or colloquially as Piss Alley (Shonben Yokocho) for its lack of restrooms prior to being rebuilt after a fire in 1999.

Here hungry commuters and passers-by can fill up on grilled skewers of yakitori (chicken), motsu-nabe (offal) and hormone-yaki (organ meats) in the rather run-down and cramped atmosphere which purposefully evokes post-war Japan.

The smoke-filled restaurants are open 24 hours and each accommodates half a dozen or so patrons. Some have English menus, but many don’t.

Liver, chicken hearts and gizzards await the adventurous inside…

The smells are enticing as is the generally affordable food that is on offer along with the half-drunk salarymen who will be your dining companions.

Yakitori Alley also offers a great backdrop for photographers – check out ShootTokyo.com for some far better work than mine.

Unlike me, someone properly dressed for the season.

I like the way the booze is stored in lockers outside the restaurant!

Back on the east side of Shinjuku Station, another area of interest is Golden Gai (新宿ゴールデン街) which is a group of narrow alleys packed with hundreds of ramshackle bars and restaurants, most only seating 5-6 people.

After all that over-indulgence, both areas are just a stone’s throw away from the train station and the chance to squeeze in with a million or so other commuters on your way home.