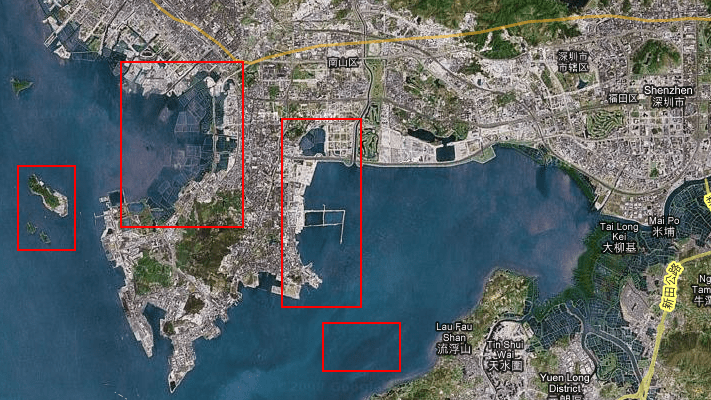 Today I was looking for my apartment on Google Maps (like you do) since hearing that they recently did a massive imagery update and noticed something curious about the images for Shenzhen at different magnifications:

You’ll notice that the images have some striking differences, especially in the highlighted areas which show massive land reclamation (the creation of new land where there was once water) and the addition of a bridge linking Shenzhen Bay to Hong Kong. Clearly, the higher magnification imagery is newer but what’s more interesting is the massive rate at which the landmass is being expanded.

This sort of environmental engineering has a huge impact on the social, economic, and physical environment with one of the most visible casualties being a  mangrove forest in Shenzhen Bay which is vanishing rapidly due to excessive land reclamation, pollution and property development since the 1980s. Over 147 hectares have already been lost, around 50% of the total thus drastically decreasing the biodiversity are the area (report). A state-funded project began last year to try and save the remaining forest.

Ironically China already has plenty of land but not in the right places and cities like Shenzhen, Hong Kong and Macau are all building outwards while real estate remains hugely expensive (propped up by corruption). Even more ironically the sea level here is rising three to five centimetres annually meaning that much of the peninsula may be submerged in 60 to 100 years!