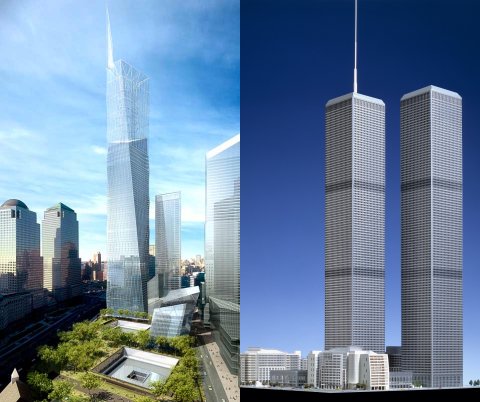 Apparently, if you thought the debacle over the designs for the new World Trade Center was over you’d be wrong. Donald Trump, a notorious American real-estate executive, has been openly critical of the Libeskind ‘Freedom Tower’ design (photo left) and has put forward his own design (right) which is basically an exact copy of the original but one story taller, dubbed the ‘Twin Towers II‘. Seems like good intentions have become wrapped up in politics and money which I guess was inevitable. Everyone involved was bound to have differing opinions of what a fitting memorial/replacement was but isn’t it about time, 4 years later, that they get on with it and actually built something instead of leaving the site as an open tomb?

For more (better) commentary see [A Daily Dose of Architecture].