In the 1950s Hong Kong had a problem – facing a surge of immigration from Mainland China it didn’t have enough affordable housing stock. In 1953 the problems were compounded when a fire burned down a large slum area in Shek Kip Mei, Kowloon, leaving thousands homeless.

After the fire, British governor Alexander Grantham launched a public housing programme to introduce the idea of a “multi-storey building” for those on low incomes. The standardised new structures offered fire and flood-resistant construction to previously vulnerable hut dwellers. This began a programme of mass public housing which continues to this day.

In 1975, the government opened Oi Man Estate (愛民邨), which was built on a concept of “a little town within a city”. The estate of 6,200 flats, capable of housing 46,000 people, is a self-contained environment complete with commercial amenities ranging from markets and restaurants to banks.

While not officially open to the public, I managed to sneak in through a fire escape with a band of other inquisitive explorers, and what we found would not have looked out of place in a 1970’s sci-fi movie such was the scale and audacity of its architectural intent.

Each apartment block consists of two quadrangular columns joined together at one opposing corner, creating a square figure of eight configuration. This leaves two open spaces within each column with walkways facing inwards and individual apartments along the outer edges.

It ominously reminded me of the human battery farms from The Matrix.

While not conventionally beautiful, craning your neck to gaze up or down the symmetrically stacked floors is simply mesmerising.

The government admired the construction of the estate because it showed improvements in public housing standards and Oi Man Estate was even on the itinerary of Queen Elizabeth II when she visited Hong Kong in 1975, making it a tourist attraction for a short while.

As the sun began to set a warm glow permeated the outer corners of the building bringing light into what was otherwise a slightly gloomy space.

While many of the residents are now elderly there was still evidence of young families in occupation, with kids playing football on the concrete courtyard at the base of the building. 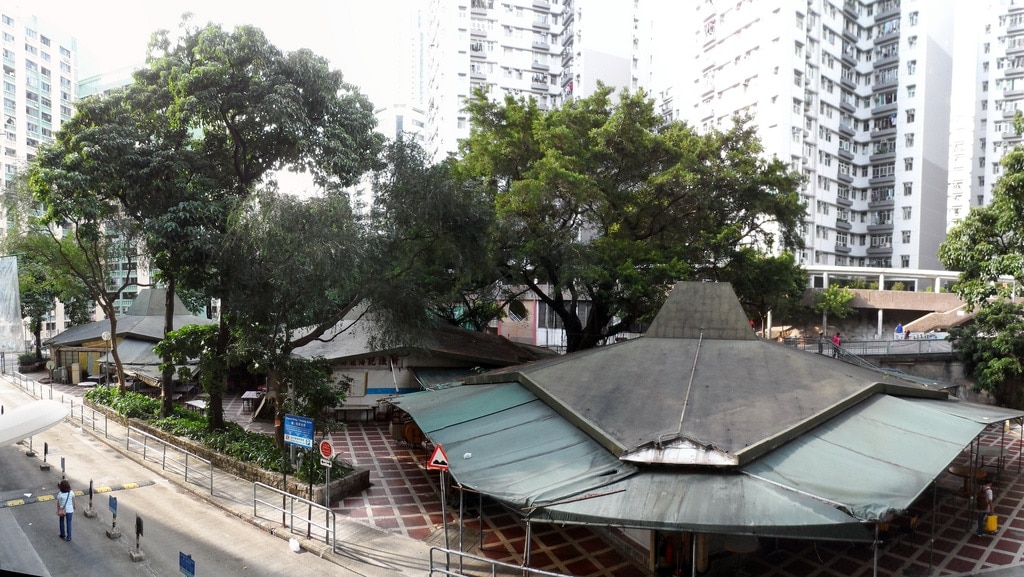 Besides the estate, you can also find a traditional Cooked Food Centre or Dai Pai Dong (大牌檔) under a canvas roof serving cheap and tasty Cantonese cuisine that takes you back to a period of Hong Kong’s history which is rapidly disappearing.