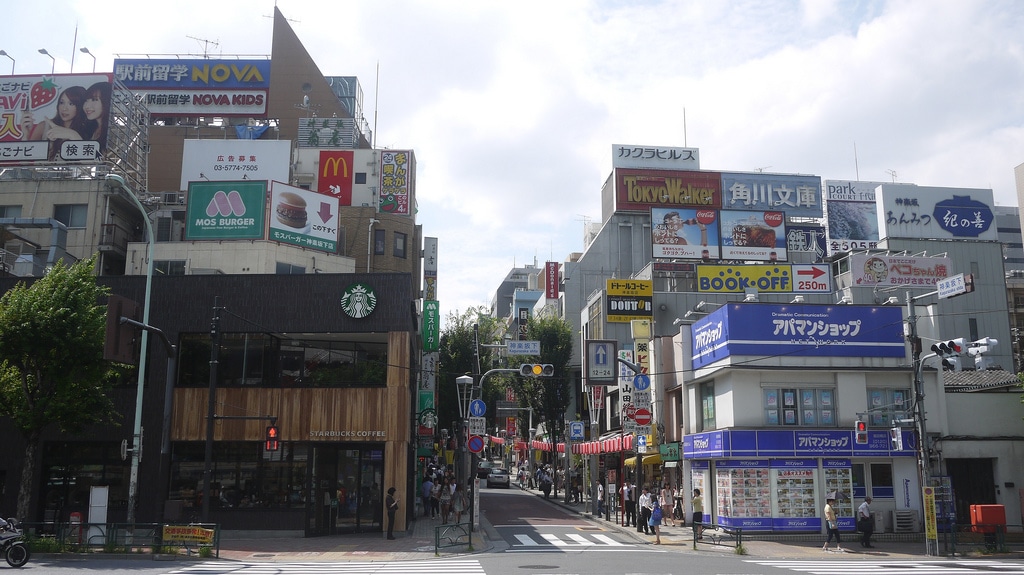 Since Tokyo is so spread out, one of the best ways to explore its many interesting spots is by bicycle. On a recent two-wheeled jaunt around where I live in northern Shinjuku, I came across Kagurazaka (神楽坂), one of the city’s oldest and lesser-known neighbourhoods near Iidabashi Station.

The southern exit of the station deposits you on the Iidabashi bridge (飯田橋) which spans both the river and train tracks below.

Incidentally, the British Council have their offices here, not a bad location.

Looking down the slope along Waseda Dori you can see the beginning of the main shopping street.

Looking back up the bridge you can see the stone footprint of a former fort which once stood along the river.

Almost every company in Japan seems to have a cute mascot for some reason – this real estate agent here being no exception.

Starbucks has a prime spot on the corner – if you’re looking for somewhere to work, the free wi-fi here is top-notch.

The leafy main avenue is lined with numerous small shops, cafes and restaurants.

Down the narrow side streets and alleyways, you can find many traditional restaurants called ryoutei (料亭), serving what’s considered the pinnacle of Japanese cuisine.

Some of them are so exclusive that you won’t be allowed in without an invitation from a regular customer, a practice known as ichigensan okotowari (見さんお断り).

In the 1930s the district was home to a large number of geisha who entertained customers at the upmarket restaurants. If you’re lucky you might still spot one today although their numbers are dwindling.

Even though most Japanese homes don’t have gardens, many people still cultivate pretty pot plants which sit on the curbs and window shelves outside. Japan is so safe that there’s little chance of them getting pinched.

Midway along the street, you’ll come across Zenkoku-ji, a small temple that looks great at night when all the lanterns are lit.

If there’s one thing you’ll find plenty of in Tokyo it’s traffic cones that are meticulously (and often mysteriously) placed to warn and deter would-be deviants.

A small fresh vegetable stall outside a restaurant.

Clean Shop – in Japan you better believe it.

Since the street is so narrow traffic can get a bit congested at times and parking is a novice driver’s nightmare.

One of the highlights at the upper end of Kagurazaka is Akagi Shrine (赤城神社) which was designed by acclaimed architect Kengo Kuma (隈 研吾) in 2010.

On the ground level sits a smaller sub-shrine in one corner (does anyone know the correct terminology for this?).

The main hall follows the style of a traditional shrine with wooden beams but brings things up to date with glass curtain walls and a sleek metallic roof.

Inside the shrine, things are equally simple and beautifully crafted.

To one side on a raised platform sits another open-sided structure.

Opposite is a modern apartment complex shrouded by shiny vertical louvres. It was built in order to fund the rest of the project and contains a restaurant and gallery space on the ground floor called Akagi Cafe.

The first time I saw one of these bikes I couldn’t quite work out what it was for but when I saw one being unloaded I found out they’re used for food delivery. The sprung suspension mechanism keeps the dishes level and prevents them from spilling out.

The far end of the street isn’t particularly notable, except for a most bizarre window display containing a tiger sitting on a toilet. I have absolutely no idea what the motivation behind this is – the sign says something about water and sewage but even Japanese speakers are perplexed by what it means.

Even if you’re not going for a fancy dinner, Kagurazaka is well worth a visit for a fascinating stroll under the shady trees through the charismatic and traditional neighbourhood.