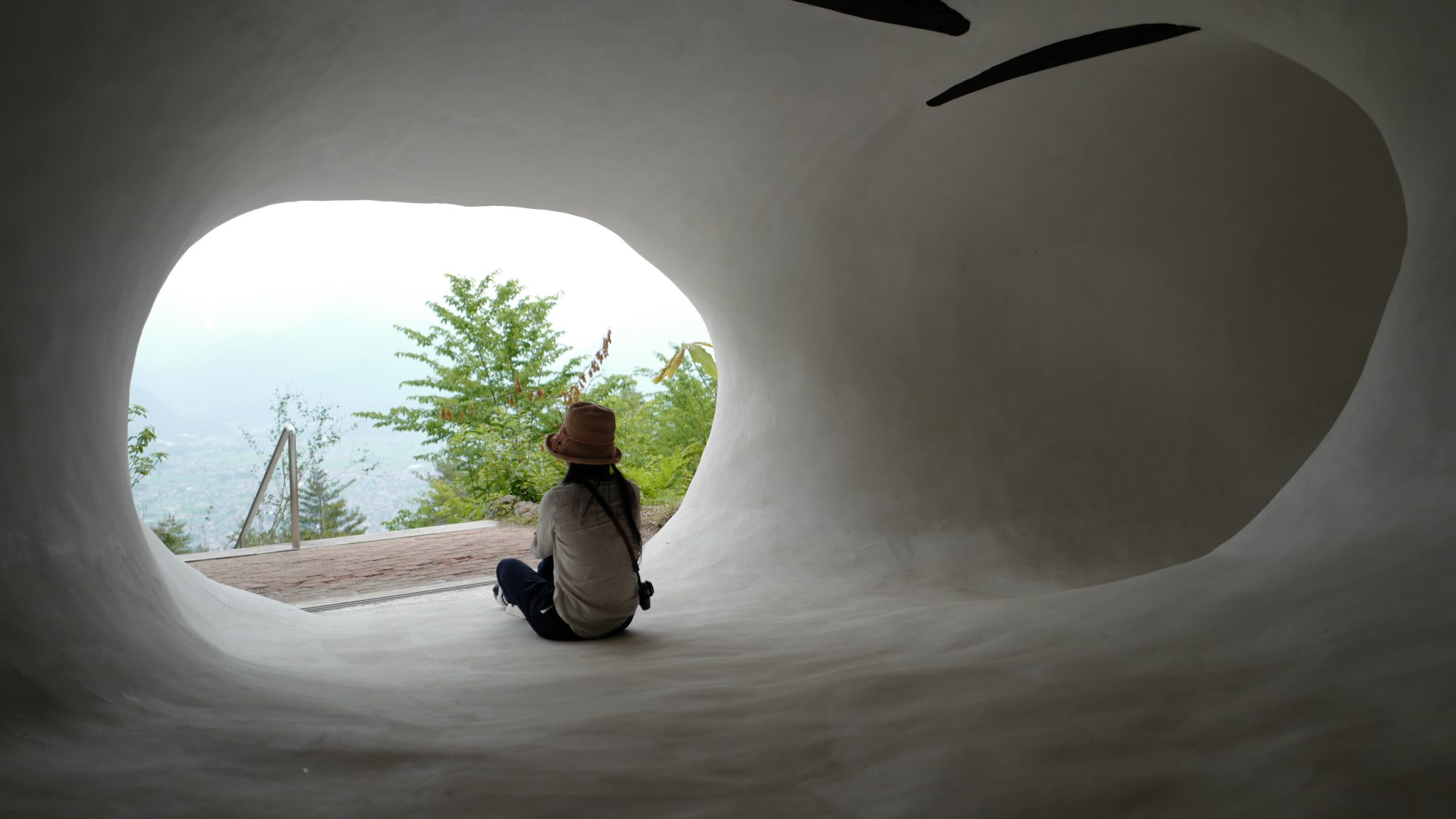 In June this year, the first-ever Japan Alps Art Festival was held in the city of Omachi (大町市), surrounded by three natural lakes and the Japanese Northern Alps in northwestern Nagano prefecture. Since it’s a fair distance from Tokyo, we decided to make a weekend of it.

Omatchi-city is surrounded by alluvial fans which are fertilised by running water streaming down from the Northern Alps. There used to be clear water channels running throughout the city. Such water has grown rich forests, cultivated a unique lifestyle and nurtured the distinctive culinary culture of the region.

The Japan Alps Art Festival is an attempt to survey mountains from corridors that connect alluvial fans and look up to the blue sky from the water ways.

With almost forty installations dotted around the city and on the mountainsides, we didn’t have time to see everything, but over an afternoon and morning still managed to get a good flavour of both the area and the works. For added excitement, I also got my first experience of driving a car in Japan which passed without incident!

Looking out over Omachi and the majestic peaks of the Northern Alps from the top of Mt. Takagari, an old farmhouse building was transformed into a white cocoon that visitors could explore. Save for the occasional intrusion of the wooden frame, there wasn’t a straight line or sharp corner in sight.

Nestled within the undergrowth of the forest near the peak of Mt. Takagari, this organic sculpture looks like it might have been created by an occult group. Built by hand in the shape of a typhoon when looked at from above, the wooden branches create an archway leading to the eye of the storm.

Everything Connects Beautifully and Returns to the Cycle

White tiles cover the floor of the Omachi Shopping Arcade in a mosaic of water- and plant-themed patterns. Like many small towns across Japan, the number of shops is dwindling as the population declines. Those which remain look much the same as they have since the 1960s.

Hidden behind the facade of an empty store, this enormous installation contained a 1/40 scale model of the Kurobe Dam and hot springs made from natural materials. The hot spring water, representing the lake of the dam, could be used as a hot foot bath by passersby.

In the evening we were treated to a taiko drum performance from a local troupe at an outdoor theatre close to where we were staying. Energetic to say the least!

After learning that there are over 8 million vacant houses in Japan and being shocked by the abandoned homes around Lake Kizaki, Brown and Garrett proposed a project focusing on the region’s population decline problem. They covered empty houses with semi-transparent white cloth and lightly trace the outlines of the houses onto it, making them appear as if the buildings were ghostly sculptures sitting beyond their veils. Visitors are left to imagine the lives which were once lived within.

Symbolising the lives that are brought together among the Northern Alps, braided cord begins at the lake and is woven vertically up into the sky until it is eventually bound to the clouds. It is also an expression of the cycle of nature, in which the water from the Northern Alps melted snow is eventually returned back to the heavens.

Lake Boat in the Alps

Using the rice and mosquito nets on the shores of Lake Kizaki, Sugihara created a work that models the image of the Alps reflected on the lake surface between the mountains. The snow-white colour and the glistening light of the ripples in the water were painstakingly created using one kernel of rice at a time.

To one side of Lake Kizaki, a convoy of unusual boats was lined up. On one group of boats, there were dead trees and shrubs; and on another, household items and other things taken from the abandoned houses in the area. The former represents environmental destruction, and the latter is a symbol of population decline.

Walking through the trees in Miyanomori Nature Park, your eyes are immediately transfixed by the unusual sight of water pouring as if by magic from the trees themselves onto the wetland below. It was a mesmerising display of what is normally hidden beneath the Alps and my personal favourite.

Drawing from the ideology of the Chinese hermit Zong Bing, Takahashi combines the concept of miniature landscapes found in traditional Japanese gardening and the Chinese principle of the three perspectives of landscape painting. Inside the old house, he represents Shinano Omachi’s landscape; the Northern Alps and Takase River, with delicate porcelain motifs of the native plants that grow in the river basin.

Inside of an old warehouse, Kuriyama creates a microcosm representing the interwoven natural system of circulation found in the vast wilderness of the Northern Alps. The installation represents water in a state of flux, evaporating and condensing before your eyes.

Overall the trip felt very worthwhile and I’d love to come back for the next instalment in 2020!