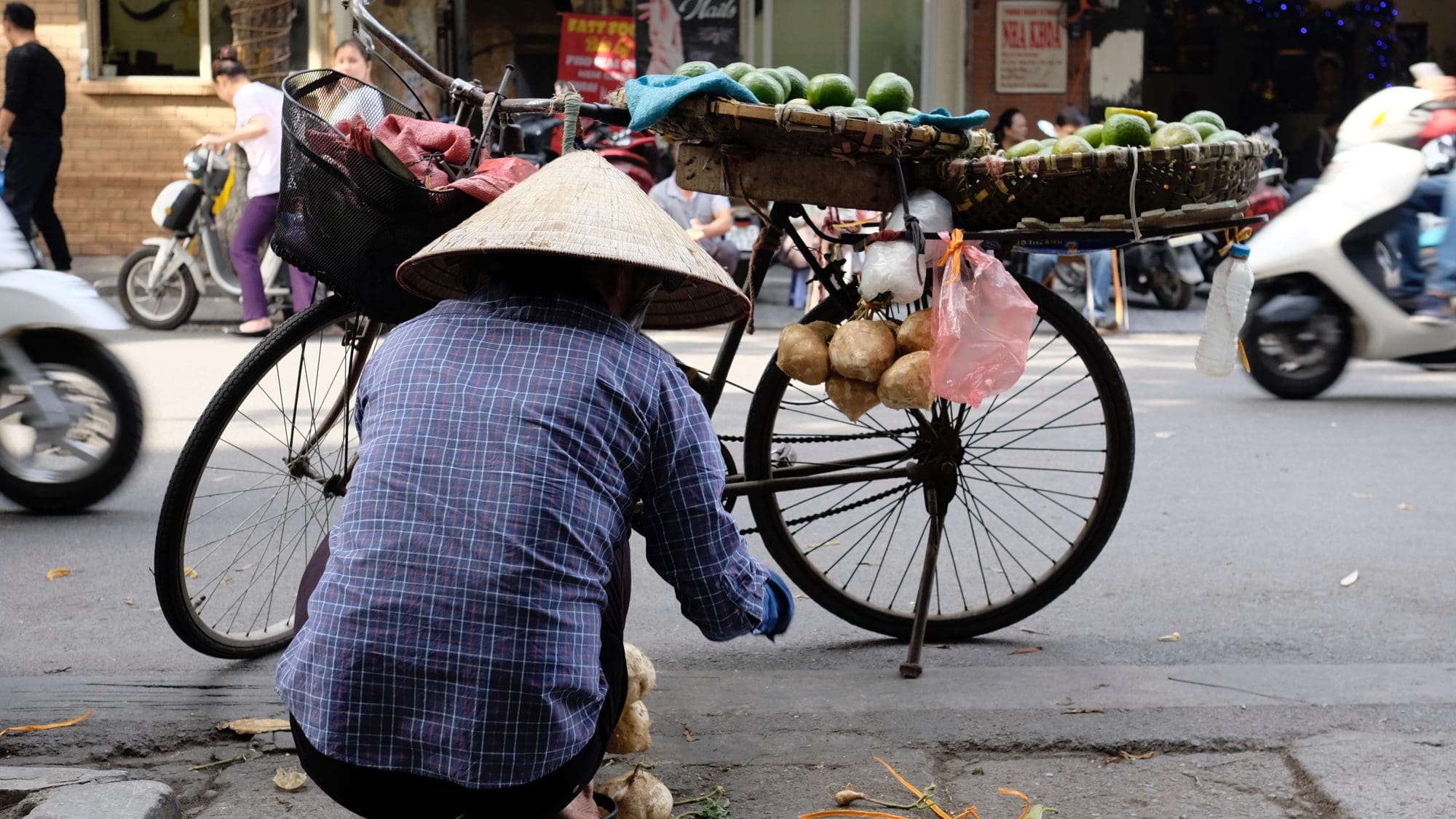 Back in December last year I visited Vietnam for the first time, spending a few days in Hanoi. I had been looking forward to the trip, having seen the likes of Anthony Bourdain and the original Top Gear crew wax lyrical about the capital city on multiple occasions.

Like many of the great cities in Southeast Asia, Hanoi is a dense chaotic place historically shaped by invading forces from China and France, creating an interesting blend of East and West.

Arriving late afternoon after a flight from Hong Kong, my first port of call was Bánh Mỳ Phố Huế, a traditional place serving crunchy baguettes filled with pork, pate and fresh vegetables. Cheap and delicious, it hit the spot.

My nose led me to Nộm Hàm Long, another hole-in-the-wall restaurant where I sat down among the locals on a small brightly coloured chair that may as well by the national symbol of the country such are their ubiquity.

For my second meal of the evening, I enjoyed a spicy salad with nuts and miscellaneous meat.

After dinner, I wandered through the back streets, marvelling at the brightly coloured fruits, flowers and other wares on display in the small markets.

I ended the evening with a stroll around Hoan Kiem Lake, a popular spot for locals to relax along its banks.

Hoan Kiem means “returned sword”, and the name comes from a legend in which King Lê Lợi was given a magical sword by the gods, which he used to drive out the invading Chinese. Later, while boating on the lake, he encountered a giant turtle, which grabbed the sword and carried it down to its depths, returning it to the gods from whom it had come. The Turtle Tower (Thap Rùa) standing on a small island near the centre of the lake is linked to the legend.

I the morning I got up early and made my way on foot towards the Old Quarter, passing an ornate library and St. Joseph’s Cathedral on the way. It was built in 1886 by the French, with the architectural style resembling Notre Dame de Paris.

The fascinating Old Quarter covers the northern half of Hoàn Kiếm District and contains uninterrupted stretches of colonial and pre-colonial architecture, well-preserved on dense warrens of narrow, wonderfully atmospheric streets.

The preserved shop-houses that lie along these roads were built a little over a century ago and were constructed in their long and narrow style to avoid being hit by high taxes. Each has a street-facing façade where trading takes place and multiple courtyards inside occupied by one or more families.

Many of the streets are named after the merchandise which they originally sold like bamboo, silver, herbs, and silk. Today each street still tends to be occupied by a single trade or certain type of product.

Walking north, I stopped at Bún Chả Tuyết for lunch. For a mere 35,000 dong, you get a big bowl full of grilled pork with white rice noodles and herbs on the side. I ordered some fried spring rolls (nem) to go with it. It was one of the best meals I had during the trip.

I love the way the shops and restaurants spill out onto the streets and adjoining alleyways. The hubbub of activity taking place everywhere you look creates a vibrant sense of community no longer seen in modern cities.

Women carrying large baskets of fruit or vegetables on bicycles or slung between bamboo poles resting on their shoulders are a common sight.

Later in the afternoon, I stopped at Cộng Càphê, a popular chain of military-themed cafe for an ice tea. It was a great place to people watch, with some of the local clientele buying food from passing vendors.

Occasionally you come across small temples hidden behind unassuming doors. Their tranquil courtyards are the perfect place to catch your breath.

When the chaos of the streets gets a little much, Manzi is the perfect place to escape it all. Situated in a beautifully restored colonial building, the café-cum-gallery is a peaceful spot to wind away an hour or two.

In the late afternoon, I made my way south to The French Quarter with its large shady boulevards and imposing colonial architecture. Even today remnants of their former occupants are still all around.

Sadly the independent movie theatre, Hanoi Cinematheque, hidden away in a labyrinth of alleyways has recently closed due to the impending construction of a new shopping mall. It’s a sore loss in a country which still grapples with a lack of artistic freedom.

Perhaps a sign of the changing times, just around the corner a glittering Louis Vuitton store is the favourite spot for young couples to take their wedding photos.