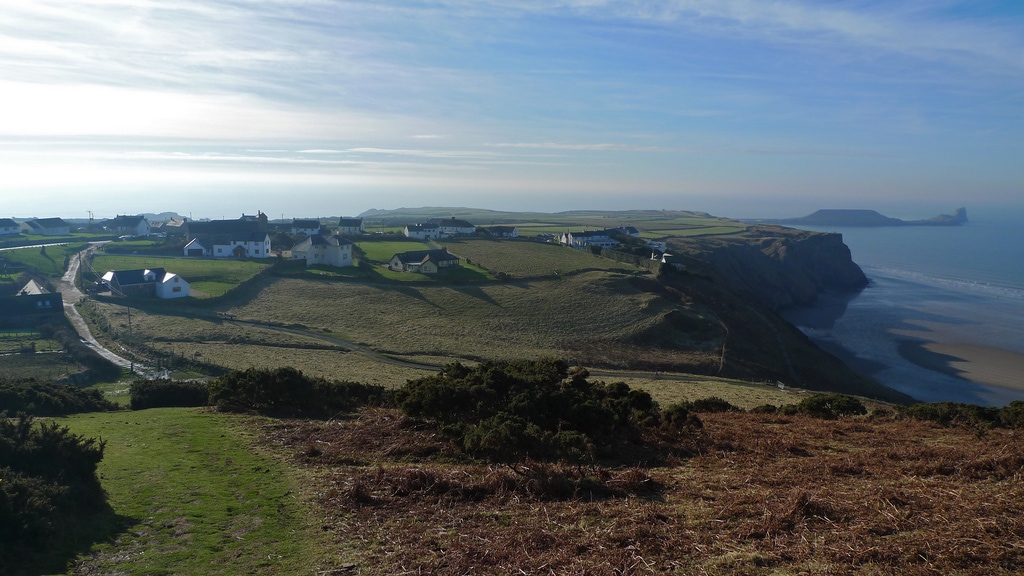 Last weekend I took a trip to South Wales to get a bit of fresh air and to explore a part of the UK I’d never been to before. It takes about two hours to reach Cardiff, the capital of Wales, from London by train making it ideal for a short getaway. While travelling around this region by public transport can be a bit limiting I did manage to get out of the cities to somewhere a bit more remote and moreover stunningly beautiful…

Having stayed overnight in Cardiff on Saturday morning I took another train to Swansea and then hopped on a local bus to the small coastal village of Rhossili which is situated on the Gower Peninsula. The area was designated ‘An Area of Outstanding Natural Beauty‘ (AONB) in 1956 for reasons I’ll leave the photos to explain.

Having lived in a city of 15 million people for the last two years this could quite literally be described as the polar opposite – scarcely populated green undulating fields stretch for as far as the eye can see until they abruptly collide with the Atlantic Ocean.

As I began to climb the Rhossili Down cliffs the sun came out, immediately casting the entire peninsular in brilliant blue / purple hues from the sky and sea beyond. The view was jaw-dropping and the effects of the freezing cold wind seemed to diminish considerably.

Further along, Rhossili Bay and its wide beach came into view, curving in a huge arc running northwards from the village. I’ve uploaded a panorama of the whole view.

The hilltop is covered in coarse heather which is ideally suited for the sort of battering it gets from the wind and sea as well as the horses which graze on it.

The highest point on the Gower Peninsula is the beacon on top of Rhossili Down at 193m overlooking the bay below. Reaching it on foot is fairly easy and takes less than half an hour from the village.

Once I had taken in the view from the top I headed back down toward the village and walked southwards in the opposite direction along the cliff top.

The sheep were clearly better suited for this sort of environment than I was and they didn’t seem at all afraid of being blown off the cliff, munching the grass right up to the edge!

The causeway at the southern end of the bay leads to a tidal island known as Worm’s Head and is only accessible at low tide. Walkers had better be careful not to get stranded if they venture out to the far end.

Above the causeway is a Coastguard lookout station which is presumably there to help prevent people and boats from getting in trouble. There are apparently a number of shipwrecks along this stretch of coastline but I wasn’t able to spot any this particular day.

As the afternoon wore on the sky began to darken and I shuddered to imagine what it would be like to spend the night here in the middle of winter.

After heading back into Swansea proper I took a quick look at the bay there also which appeared quite moody in the fading light but by now my extremities were pretty cold so I caught a late-afternoon train back to Cardiff.

On Sunday I took a wander around Cardiff and while it’s a nice enough city I didn’t feel like there was much to write home about, save perhaps for the interesting frontage to the Wales Millennium Centre which hosts various events and performances.

In case you wondered the writing here is in both Welsh and English, with the former still being in active use and having equal status to the latter although being far less widely spoken.

If you’d like to reproduce the walk along the Gower Peninsular I did above you can download a map and guide here.