Fashions come and go in Japan as frequently as the weather changes in Britain. Supposedly Japanese women are the most fashion conscious in the world, setting the trend for others. I’m not one to follow fashion, in fact I despise it more often than not, as for the most part it seems as shallow as the water on the bottom of a dried up riverbed. That said I thought I just had to pass comment on a new sub-culture fashion style in Japan known as “Decorer” (a Japanglish word) as photographed by MasaManiA. Basically it’s got something to do with ‘one who decorates, or is decorated’. Yeah… 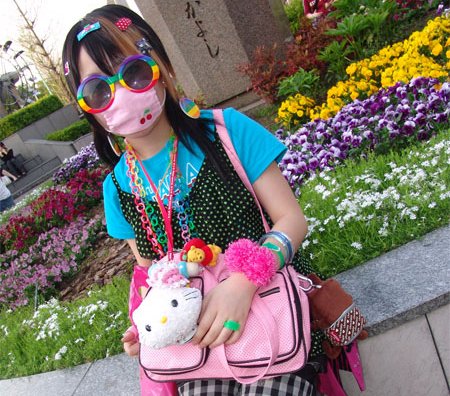 Yes, it’s bright, lurid and bound to get you noticed. The funny thing about these sorts of fashions anywhere in the world is that for as many sub-cultures there are they all end up looking the same and thus negate their position as being anything more than teenager ‘rebellion’. Still, it is sort of cool, although I somehow doubt you’ll see anyone walking down the high-street in the UK looking like this!!

N.B. – Please remember this is not mainstream Japanese fashion I’m talking about, we don’t want to enforce any more stereotypes…!