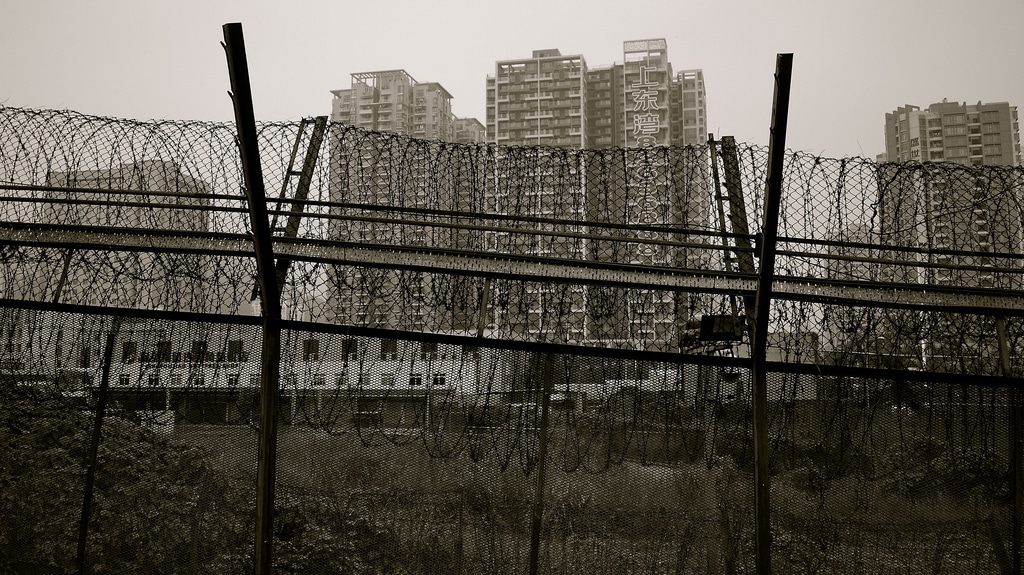 Under the principle of “one country, two systems”, Hong Kong is defined as a Special Administrative Region (SAR) of China. It borders the neighbouring city of Shenzhen immediately to the north (where I lived for two years previously) which is physically divided from Hong Kong along the Sham Chun and Sha Tau Kok rivers. I recently visited the border town of Sha Tau Kok (沙頭角) on the Hong Kong side.

Most of the Shau Tau Kok’s residents are from Hakka farming or Hoklo fishing backgrounds but due to the decline of these industries in the area over the last few decades, younger better educated generations have long moved to live and work in more urban areas of Hong Kong. Some of the remaining older generations live on in the villages, with families returning at festivals and holidays to spend time with them but the area is clearly in serious decline.

Entering these premises is probably not recommended since many of their ceilings and floors have collapsed.

We came across this old black and white tv on a table open to the elements – an eery reminder that people were living here not that long ago.

Onc house was particularly creepy with various trinkets and photos of ancestors still lining the peeling walls. It looked as if someone might almost be living there still, although maybe not of the walking and breathing kind!

Further up the hill, a school lies empty, having closed in 1998 (so a local told us). It doesn’t look like anyone plays basketball much here anymore.

The same theme continues everywhere with buildings at various stages of disrepair and ruin. While this might not be grade A listed heritage, it’s a shame to see it disappear.

One of the few residents we came across didn’t seem to mind me taking her photo – I wondered what she thought about what was happening to her village.

In another outhouse, large dusty wicker baskets lay unused for who knows how long.

Some areas are still off-limits and due to the lack of human activity have become a thriving natural habitats for animals and plants. It reminded me of the DMZ between North and South Korea.