Thought I might elaborate a little more on my travels around London yesterday. It was a bit of a whistle-stop tour or rather less of a tour and more of an unplanned operation in getting lost! I started off the day getting a train from Bromley-South to Victoria and from there the tube to Tottenham Court Road where I paid a visit to the impressive British Museum.

One of my primary reasons for going there was to take a look at the incredible new(ish) glass lattice roof which covers the central courtyard. It really is an amazing feat of engineering and the juxtaposition of old and new architectural styles has worked particularly well.

After a brief look around at the various exhibitions, I went and had a look in a few shops down Tottenham Court Road and Oxford Street. One of my favourites was ‘Muji‘ which is a Japanese chain (surprise surprise) store which sells a variety of unique stationery, housewares and clothes with a “unique brand of ‘no brand’ style”. Cool huh?! It’s all pretty good stuff at fairly reasonable prices – I only picked up a simple ring-bound notepad and pen though!

I then travelled down to Piccadilly Circus and had a look in the Japan Centre which is sort of a book shop, travel centre and restaurant all in one. Although all the books were a little on the expensive side it was fun to have a look at what they had to offer, not that I actually understood a word of any of it! Obviously, I was doing a good job of pretending to look as if I knew what I was looking at because at one point a Japanese person attempted to start a conversation with me. In Japanese. As you can imagine that didn’t get very far and I felt like a bit of an idiot! After making a hasty exit to avoid any more confrontations I walked down to St. Jame’s Park and had lunch sitting on a bench overlooking the lake. One thing that was apparent here were flags for the London 2012 Olympic bid – something that, in my opinion, is a gross misappropriation of taxes.

My next stop took me to Covent Garden where I had a wander around before heading to Leicester Square. I don’t think I’d ever been there before and was taken back by the sheer number of cinemas in such close proximity, it’s a shame that they all seemed to be showing the same old Hollywood garbage currently doing the rounds. Around here I stumbled across China town which is a fairly substantial area with many interesting sights and sounds.

On my way down the main street, I noticed one rather shabby-looking shop which I was sure I recognized but couldn’t remember where from. After wracking my brain for a minute or two I realized wherefrom – none other than the fantastic ‘Trigger Happy TV‘! Here, preserved for posterity, is a little comparison: 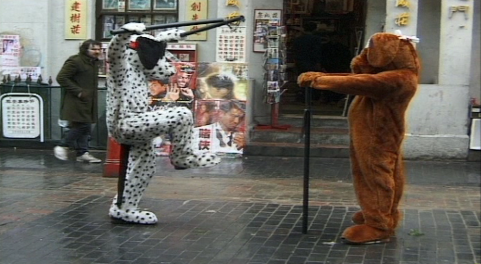 It’s strange how the brain can retain such useless information for long periods of time. I wish the same could be said for the contents of my uni course!

This is the point at which I got a little lost. You would have thought that getting to St. Paul’s would be simple considering there’s a tube station right next to it of the very same name but yours truly decided it would be nice to have a walk along the Thames and take the scenic route. It turns out that working out what direction the Thames is in is a little more tricky when you’re not familiar with the local geography and have very little in the way of landmarks to go by when you’re stuck between huge buildings on either side. Obviously, I found it in the end but by this time my feet were beginning to get pretty sore and the weight of my rucksack a bit of a burden. I didn’t actually go in St. Paul’s because they charge an extortionate amount to get in (it being a church and all…) so I went straight on, over the millennium bridge, to Tate Modern.

I won’t bore you with the rest of the rather tedious details but sufficed to say that I made it back to Norwich without much trouble. The Tate was good, but not brilliant – I guess it’s all a matter of what you like. Unfortunately, the weather was fairly overcast most of the time so I didn’t really get any great pictures but at least I had a good time. If you’ve read this far well done, I think this is probably the longest post I’ve ever written!