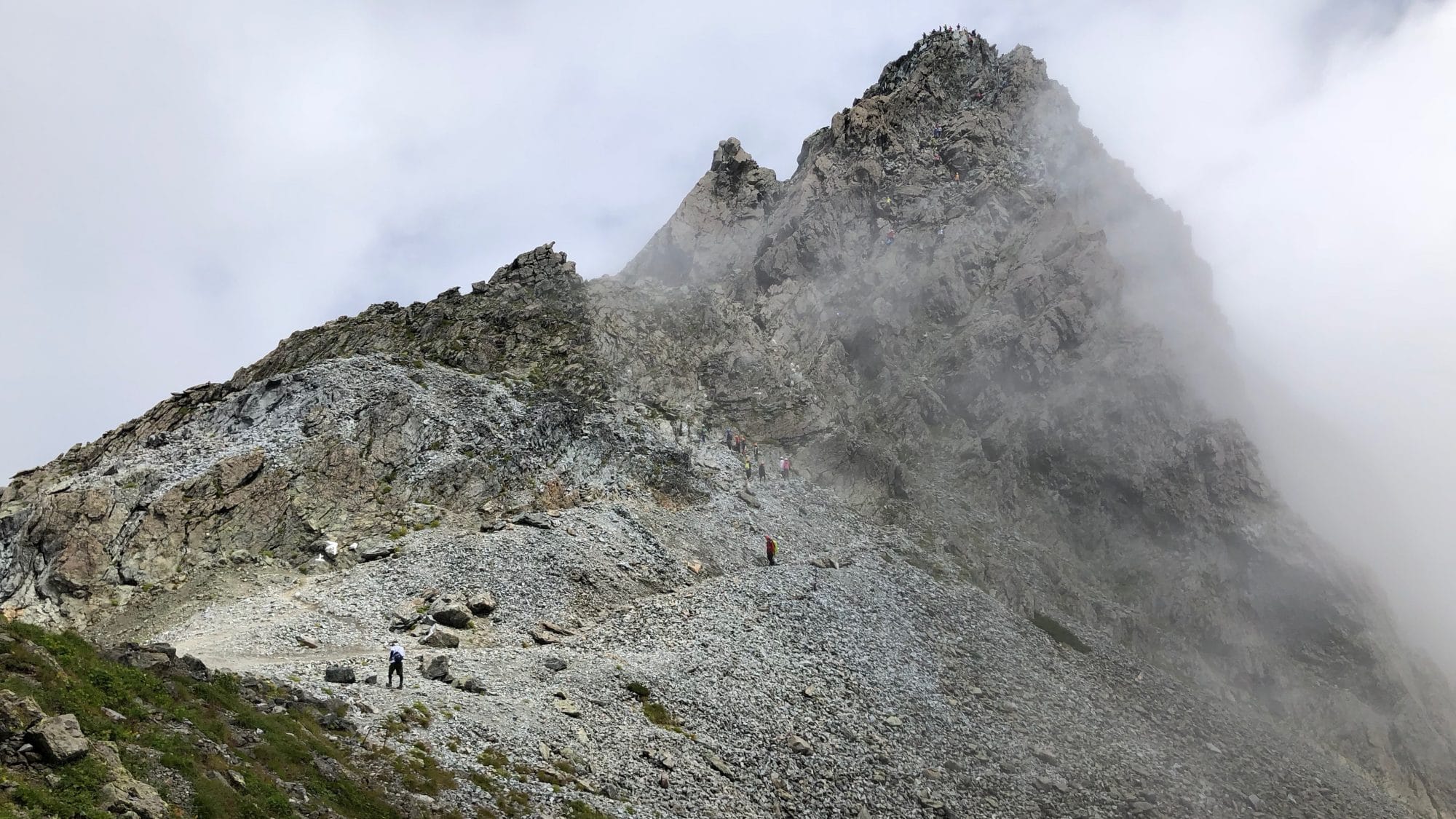 For the last three years, Chen and I have been returning each summer to Kamikōchi (上高地) in the Northern Japan Alps of Nagano Prefecture where some of the best alpine trails in Japan can be accessed.

Our goal had always been to  the 3,180m high Mount Yari (槍ヶ岳) but being over-ambitious in our selection of routes had resulted in us falling short in 2016/17.

This year we took an easier approach and made it all the way to the top! The route was not perhaps as hair-raising as previous years, but we still got to experience some incredible views minus any near-death experiences.

Getting to Kamikōchi from Tokyo takes 5 hours minimum so you can either travel the day before your hike, take an overnight bus, or travel in the morning and start hiking in the afternoon.

I’m not much for sleeping on any form of transport so we choose to wake early on Friday and travel via train and the subsequent bus which takes you into Chubu Sangaku National Park (中部山岳国立公園).

We arrived shortly before 1 pm and were greeted by the familiar sight of Mount Hotaka (穂高岳) towering above Kappa Bridge where tourists were enjoying the sparkling clear waters.

The first leg of the hike retraced our steps from the previous year, taking us past Tokusawa (徳沢), where we paused for a late lunch. They have a really nice campsite here if you were just doing a short overnight trip.

At Yokoosanso (横尾山荘) we diverged from that path that goes up to Karasawa Camp Site (涸沢小屋) and continued north, following a stream gently up the adjacent valley.

We made it to Yarisawa Camp Site (槍沢キャンプ地) shortly after 6 pm, having stopped about 30 minutes earlier at Yarisawa Lodge (槍沢ロッヂ) to pay the fee.

The campsite was already full by the time we reached it and, with dark clouds gathering overhead, we quickly put up our tent on the side of the dry riverbed praying that wouldn’t get washed away in the night.

After wolfing down the sandwiches I’d pre-made for dinner, the heavens opened and we retreated into the tent and tried to get some rest.

The wind and rain lashed at the tent on and off the whole night but by 6 am things had calmed down.

As usual in Japan, most of the other campers had packed up and left before dawn so we were almost alone when we ventured out to make breakfast.

Our first attempt at cooking pancakes on a camping stove was a bit of a disaster with the batter sticking to the bottom of the too-small pan. It was barely edible but enough to get our engines started.

For the first hour, the trail continued up the valley at a gentle incline before becoming increasingly steep and rocky.

We quickly caught up with the tail end of the early starters and were soon in a procession snaking steadily up the mountainside.

We entered the clouds at around 2,700m and the combination of perspiration and the humidity quickly drenched our clothes.

After walking for almost 3 hours, we got our first glimpse of the jagged peak of Yarigatake just before 11 am. The name of the mountain derives from its shape, which resembles a spear (槍 yari) thrust into the sky. Because of this, it’s also called the Matterhorn of Japan. Ridges and valleys reach out from the top in all directions.

20 minutes later we reached Yarigatake Lodge (槍ヶ岳山荘) which sits on a ridge at 3,080m. The clouds parted momentarily to provide us with a full view of the peak and the long queue of climbers ascending to the top.

We decided to have a break and set up camp since we would be sleeping beside the hut overnight. For once we were not the last ones there and managed to get a good spot. Being fairly exposed and with strong winds expected we tied all the guy lines down to heavy rocks.

Having had lunch and a nap to catch up some of the sleep lost the previous night, we hired helmets from the hut and set off for the 30-minute climb to the top. It was now 3 pm and all the early birds had descended so there wasn’t any queue.

While the climb to the top is not for the faint of heart, it’s not nearly as exposed as some other climbs we’ve done before so didn’t feel terribly dangerous. All the tricky parts have chains or ladders.

Climbing over the top of the last ladder out onto the small rocky outcrop at 3180m we were treated to a jaw-dropping 360-degree panorama of the surrounding mountains.

Other hikers paid their respects at the small wooden shrine while we sat for about 20 minutes enjoying the view and tried to identify the other peaks we’d climbed in the past.

The route down diverges from the route up to avoid congestion but was equally straightforward, if vertigo inducing!

Back down at the hut, it was a getting chilly outside so we ate our dinner of curry rice in the communal cooking area. The hut is a surprisingly large complex made up of multiple multiple buildings joined together.

It has a small cafe open during the day for campers and you can also buy water to refill bottles.

By 6 pm a thick layer of cloud was covering the mountains below and it felt like our campsite was floating in the sky. The sunset was magic.

Howling winds pummelled the tent much of the night and we woke to find the campsite enclosed in the clouds. Instead of burnt we had hot chocolate and Weetabix for breakfast.

We began to descend at 8 am. Other hikers appeared as ghostly apparitions in the fog. Without any visible landmarks, it felt a little disorientating but luckily the path is well trodden.

After passing the upper layer of , the valley opened up with lush vegetation and a beautiful tree-lined ridgeline.

Hugging one side of the valley, we walked in and out of pockets of cloud which cast an eery glow over everything.

At 11 am we reached Yaridaira Hut (槍平小屋) where we stopped for refreshments. If you were really motivated you could probably make it here in 1 day from Yarisawa.

Eventually the trail crosses the rocky gorge and joins the construction road used for building the huge concrete retaining walls that you’ll see imposing themselves all across Japan.

Around 3 pm we reached the end of the trail at Shinohotaka Onsen (新穂高温泉). Since it was too late to get back to Tokyo that day, we took a bus to Gasho Forrest Nakao Camp Site (合掌の森中尾キャンプ場) which had a very welcome but very public onsen (a story for another day).

We were physically shattered but elated to have finally conquered Yarigatake (even if we did take the easy route). I’m not sure when we’ll be back in the area but the memories of all our hikes here are bound to last a lifetime.