Whereas up until relatively recently the main lines of communication were Telephone, SMS, Email and IM to an extent (with snail mail for real old school types) the waters have been somewhat muddied in the past year with the advent of micro-blogging services like Twitter and so called “life streaming” services like FriendFeed, which aggregate content updates from across your accounts on different sites (e.g. as below). 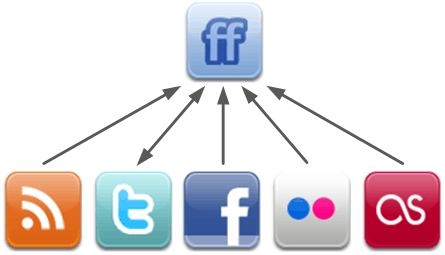 Twitter and the like have often been criticised for contributing more background noise rather than useful content but since relocating to China I seem to have found an actual use for it. Where as all the aforementioned modes of communication are one-to-one for the most part, Twitter is one-to-many and visa versa many-to-one. It enables the broadcasting of short messages to a mass audience of “followers” (or just curious bystanders) without the expectation of a reply necessarily. When trying to keep in touch with people on the other side of the planet I have found this especially useful to avoid repeating myself to everyone who just wants to know “What are you doing?” (while trying to avoid mindless trivia).

In terms of consumption I especially enjoyed Twitter’s special coverage of the US election today where often the latest news updates were being “broadcasted” in a live stream even before the news networks could get the information out along with some interesting user commentary.

The medium is certainly in its infancy but will be interesting to see how it develops and what new ways of harnessing this collective voice are found. To get started why not see what’s happening — right now.