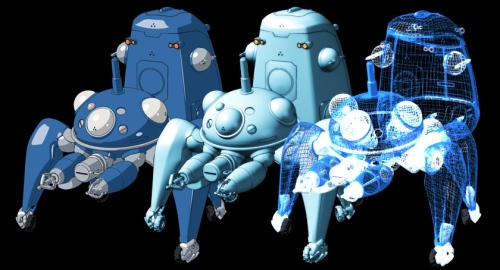 As if a collective prayer was answered I just found out that Production I.G have announced a new chapter in the GITS saga – Ghost in the Shell: Stand Alone Complex – Solid State Society. The last two series have been pure genius and could even have been said to improve on themselves so I have high hopes for the next incarnation.

After the spectacular ending of the 2nd Gig who knows where it will go next!

Production I.G has revealed in a stock disclosure that the upcoming Ghost in the Shell: Stand Alone Complex Solid State Society will be a 100 minute movie released in summer 2006. Anime News Network reports the movie is being produced in Hi-Vision, a format used by Japanese broadcast networks to support wide-screen televisions. The same production team, including main staff, will be carried over from the TV series. It takes place two years after the refugee riot incident. A significantly larger Section 9, with over 20 new officers, investigates terrorist actions related to a wizard-like hacker “Kugutsu Mawashi.”