It’s been over a month now since my last trip to Korea but I wanted to share a few photos from Busan (부산) which I visited for the second time since the first in 2008. Busan (or Pusan) is the second largest city in South Korea, located on the southeasternmost tip of the Korean peninsula. 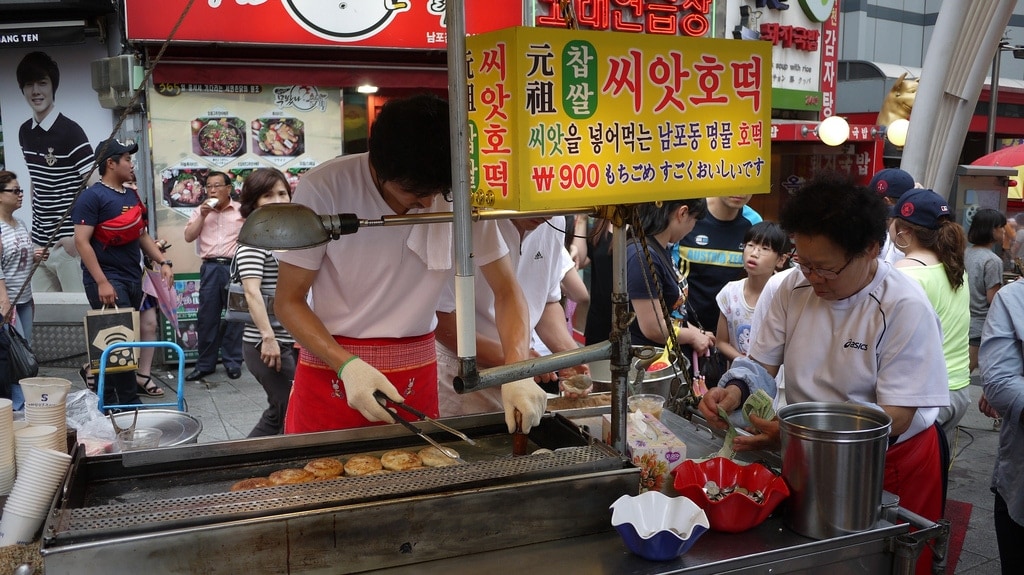 Compared to its more fashionable cousin in the north, Busan has far less of a cosmopolitan vibe than Seoul which makes for a nice change of pace and a good place to relax. I arrived by KTX train on an overcast drizzling morning which rather dampened my spirits but things brightened up a bit once I reached the busy area of Nampo-dong (남포동). 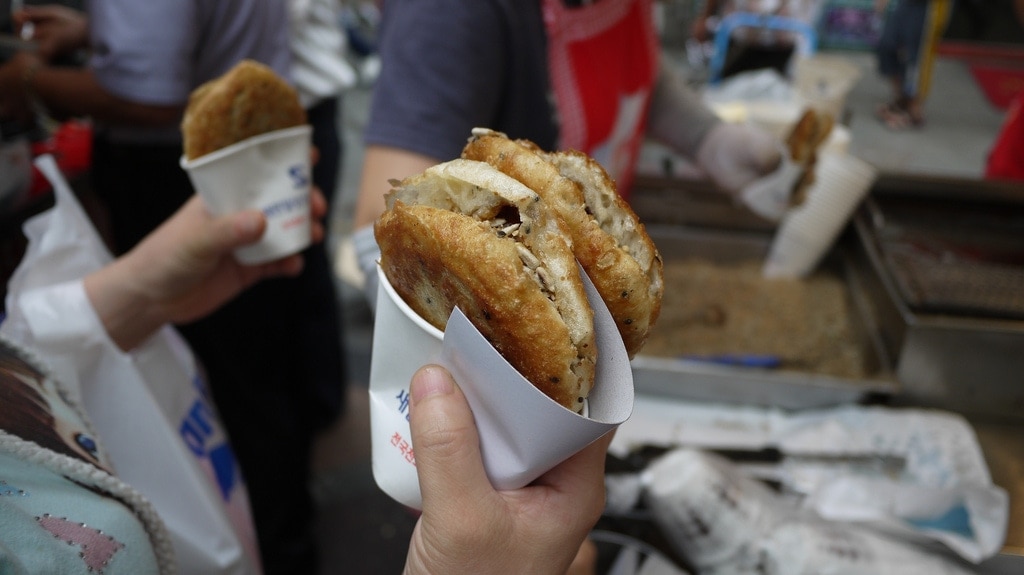 The streets here are packed with shops, restaurants, and a number of cinemas which play host to Busan International Film Festival (BIFF) each year in October. Throughout the area you can also find plenty of cheap tasty street food – look at the lengths of the queues to tell what’s popular! 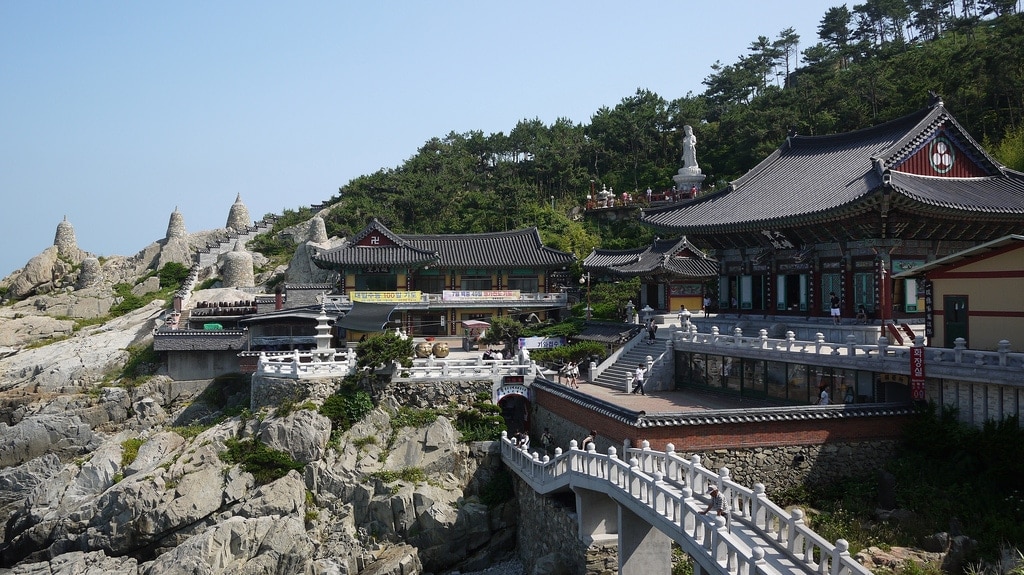 Heading away from the city center by bus I visited Haedong Yonggungsa Temple (해동 용궁사) which, while not as extensive as Beomeosa, is nevertheless worth seeing for its rare position along the rocky shoreline (most are in the mountains). It was first built in 1376 during the Goryeo Dynasty and notable features include a three-story pagoda with four lions looking out over the ocean (symbolising joy anger, sadness, and happiness). Heading back towards the city center my friend recommended we try a local delicacy for dinner. Something I learned on this trip was never again to come face-to-face with your meal before eating it. Especially when what you’re about to eat is wet, slimy, looks like a snake, and is very much alive. 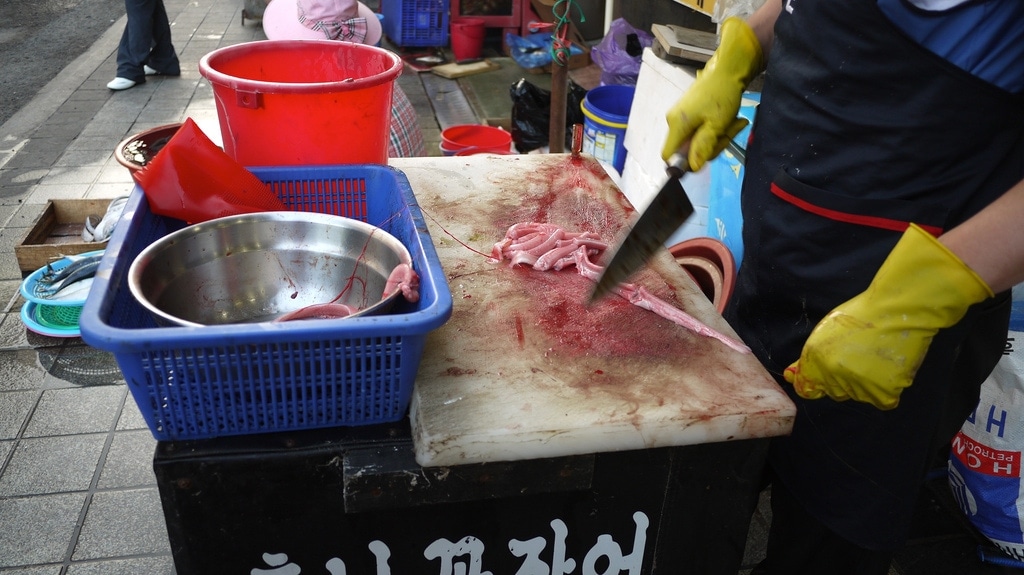 The sight of this poor eel being fished from its tank, skinned alive, and then grilled while squirming all the time was not the best way to work up an appetite. I’m told they don’t feel anything once the head is chopped off but still… 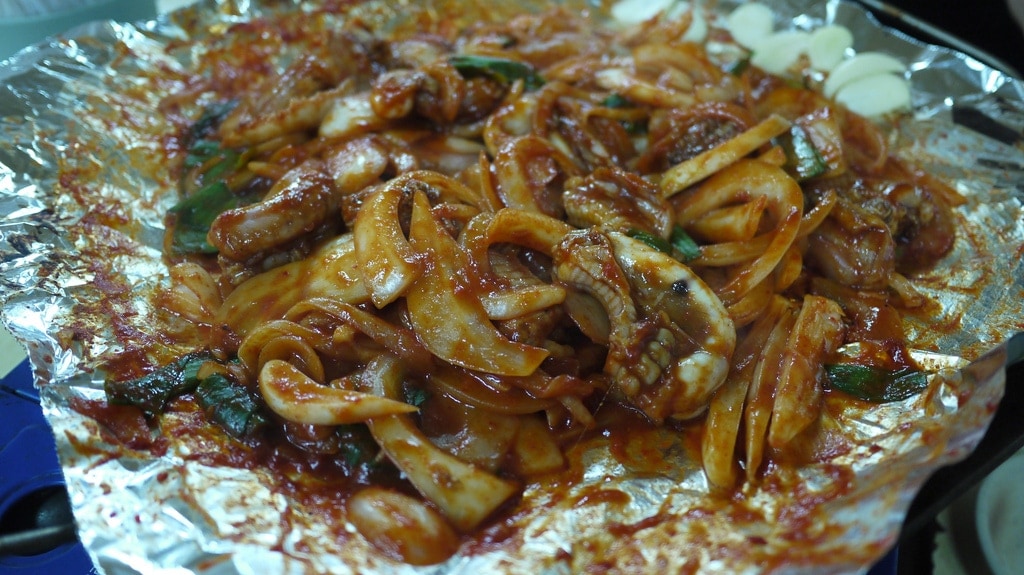 To be fair the few bites I took were pretty tasty (my friend managed to polish the rest off) but I feel an apology is in order. Sorry Mr. Eel – hope you get a better deal your next life 😉 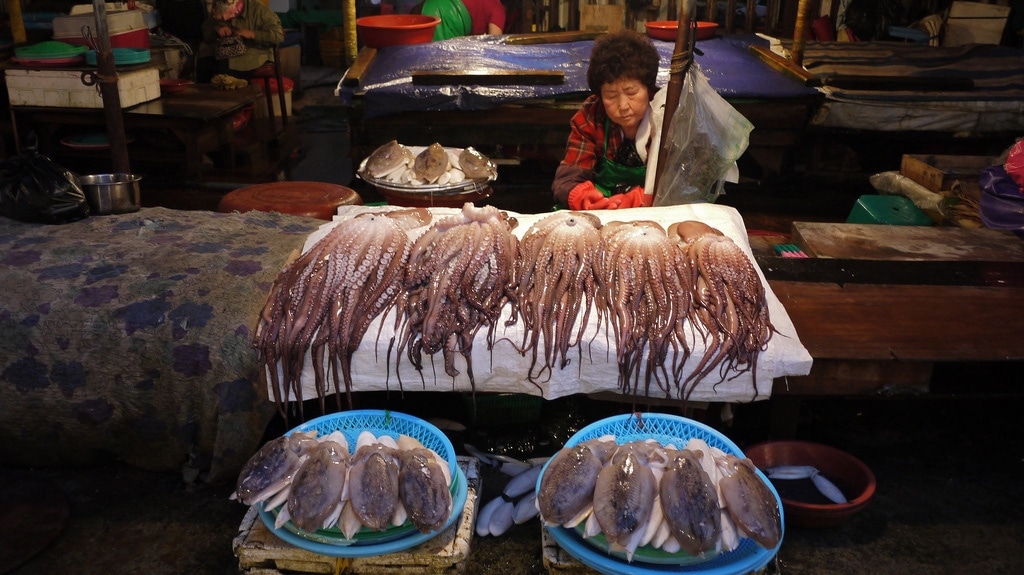 The evening was ended with a trip to Jagalchi Fish Market (자갈치시장) where the old women still looked as bored and mean as before, surrounded by all manner of exotic aquatic life for sale. By this point my twice-around-the-world-in-one-week jet lag was beginning to kick in badly so I stumbled back to the hotel for a night of melatonin induced slumber. 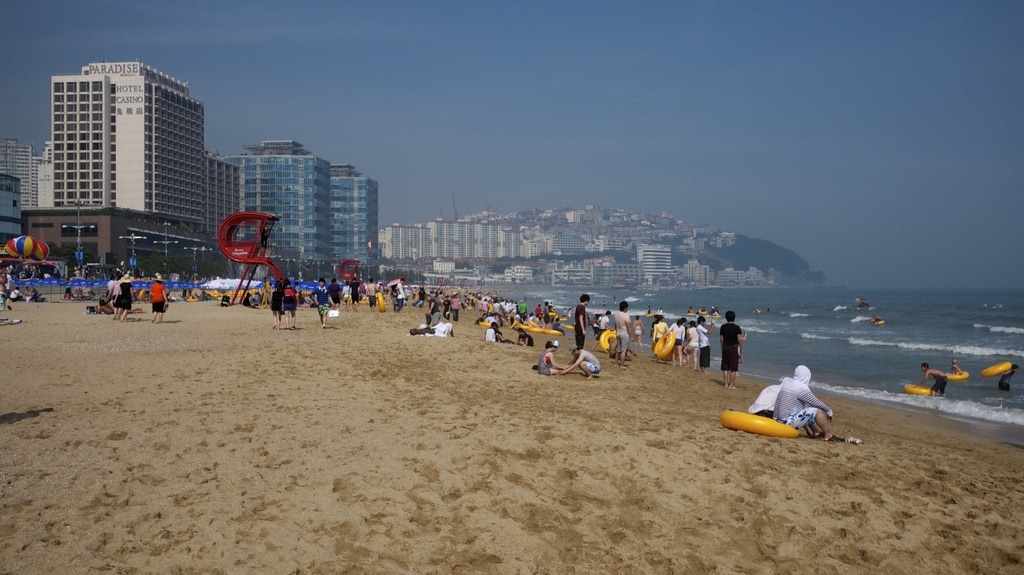 The next day I felt like taking it easy so headed to Haeundae Beach (해운대해수욕장) which takes its name from a ninth century scholar rather than a similar sounding car manufacturer! The beach is notorious for becoming extremely crowded in the peak season but wasn’t to bad on a weekday. Although the weather was warm upon diving in the sea it turned out the water was the complete opposite. How anyone managed to spend more than 30 seconds at a time in the freezing waves I don’t know. 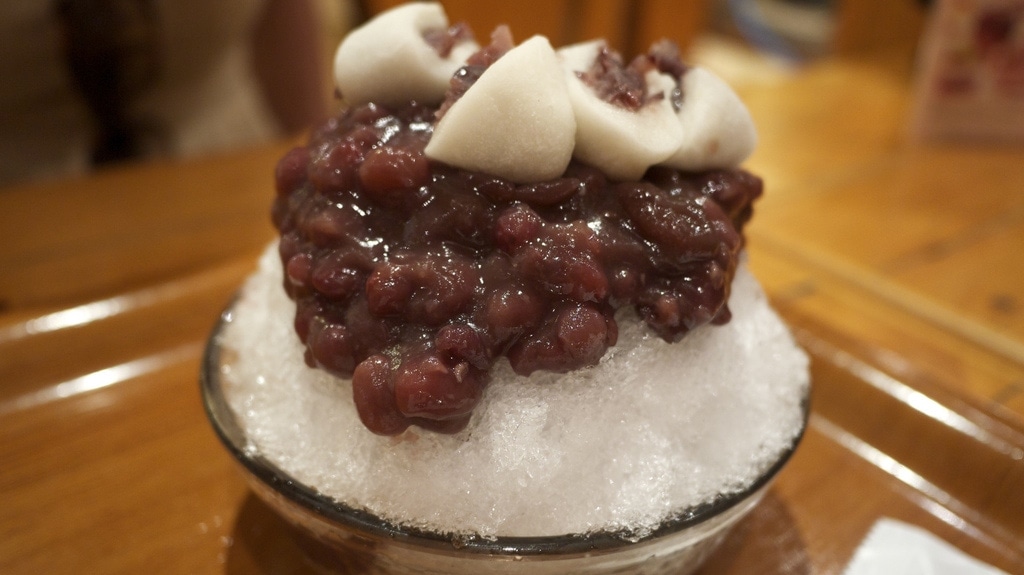 A cold desert after a cold dip was just what the doctor ordered – you may recognise this as patbingsu (shaved ice, red beans, and glutinous rice), the same as I had in Jeonju. Funnily enough the same cafe did a decent english breakfast also. 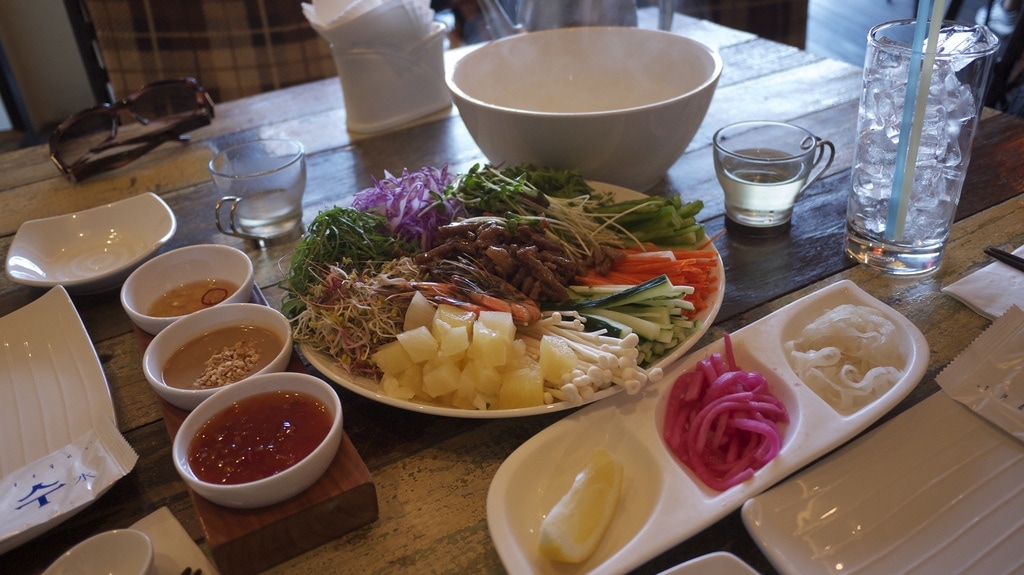 I took a break from Korean food that evening to have a Vietnamese feast in a particularly nice restaurant on Dalmaji Hill (달맞이고개), overlooking Haeundae Beach. Dalmaji is a rather gentrified upscale neighbourhood with art galleries and pricy restaurants aplenty – if you’re lucky you might spot the odd Korean celebrity or at least passing blacked-out luxury cars. 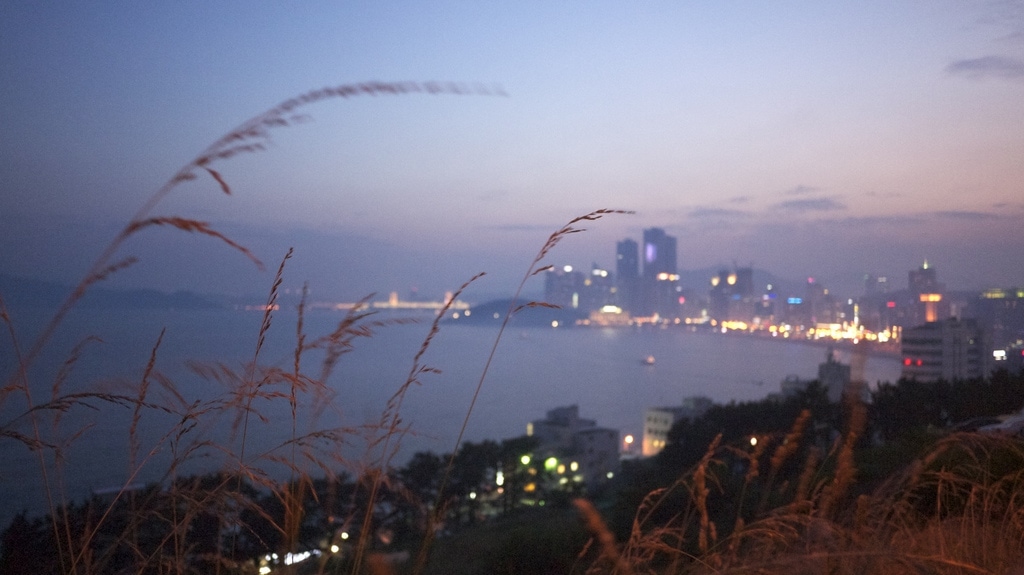 The view walking down the hill at dusk was particularly memorable and indeed over 200,000 moon watchers come here to pray for their wishes to come true on the year’s first full moon. Not a bad end to a short trip though Busan.