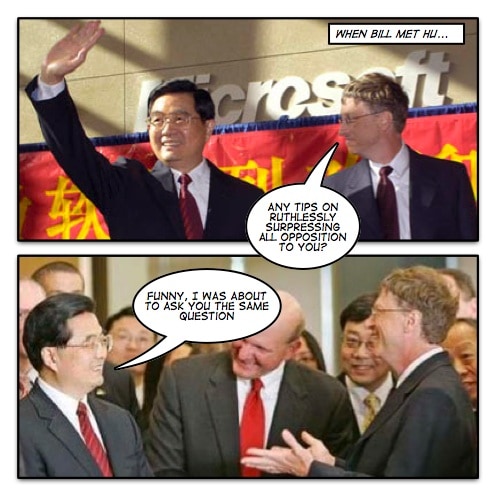 With its economy on the rise China is rapidly becoming best friends with western business and yet it is still a communist state with an appalling human rights record, widespread censorship and a large proportion of its population living in abstract poverty. It is this dichotomy which makes China a country of contradictions.

You can’t help but feel that this economic prosperity has done more to brainwash the Chinese people into a position of political indifference than the Chinese government could have ever dreamed of post-1989. In other words if you have a comfortable life with all its materialistic trappings who cares about the government? Of course on the flip side while a few prosper those on the bottom of the heap are no better of, in fact the indicators in some areas show a steady decline in well-being. The ironic thing is that these people are in the vast majority and history has much to say about what happens when you push the majority to far…

Still the propaganda continues. 1989 still hangs in the air but has been all but erased from the collective memory of a population where careless talk really can cost lives. Even the children of the intellectual elite, when presented with a photo of the Tank Man, could not identify this iconic image. I think this just about says it all.

I’d recommend anybody watch this excellent documentary from PBS. Perhaps a few multinationals also might think about re-evaluating their corporate ethics statements also!

Update (29/06) – Please read Stephanie’s comments after the break for a much better insight into the situation by someone who would know much better than me!