With North Korea increasingly sabre rattling and relations with the south breaking down under South Korean President Lee Myung-bak’s conservative hard-line approach things are becoming increasingly tense along the 38th parallel, the most heavily fortified border in the world. Combined with the north effectively being allied with China and the south being allied with the US things could get messy very quickly if there is any further escalation. 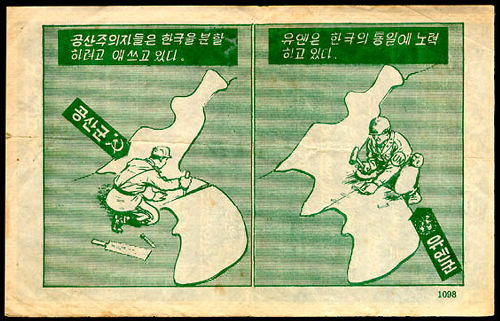 Whilst there is propaganda on both sides it’s only in the north that you will still find the same type of turgid Soviet-esq Socialist Realism that one might expect from such a repressive regime. No clearer is this illustrated than in the advertisements which permeate everyday life in one of the only forms of artistic expression in which “representation equals endorsement“.

The California Literary Review has a great collection of North Korean Propaganda posters, some of which are shown here. I find it fascinating to see the Mao-era design style replicated throughout the communist regimes in this part of the world –

Posters are visual illustrations of the slogans that surround the people of North Korea constantly. North Korean society is in a permanent mobilization. Party and government declarations are stripped down to single-line catchphrases. Through their endless repetition in banners, newspaper headlines, and media reports, these compact slogans become self-explanatory, simultaneously interpreting and constructing reality.

“Pyongyang, a great place to live”

North Korea is the last country of its kind in terms of being almost completely isolated from the outside world and most of its people live on the edge of poverty with only very basic amenities and in constant need of foreign aid to prop things up. With no access to external sources of information such as the internet they effectively live in a bubble where everything they see, hear and are told is controlled by Kim Jong Il’s dictatorship. Contrasted with out own information driven society it’s hard to imagine what it must be like for them.

How long the north can remain in isolation remains to be seen but one thing both Korea’s share is their fervent sense of national pride and loyalty; case in point I recently joked with a South Korea friend about whether she thought it was odd that she lived in a Samsung house, drove a Hyundai car, has an LG mobile phone, shops at Lotte, and only ever flys Korean Air?! Answer: Yes, very, but not much choice considering what’s on offer. Here the conglomerates rule. 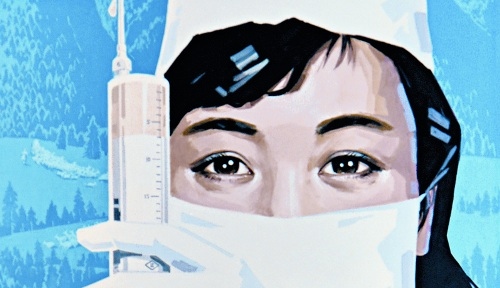 Much of this nationalism can be traced to the intrusion by the Japanese in the late 19th century which led to forms of resistance and the construction of Korean identity in ways that pitted them against foreigners, tradition, and even themselves. Today this anti-foreigner sentiment has been extended to the US who still station thousands of troops in the south.

While reunification remains the ultimate goal of both sides (albeit not necessarily for the same reasons or end goal) this still seems a long way off and there is little public interest in South Korea for anything which might upset the status quo of their relative prosperity.

With thanks to @Veropresso for her input on this article and who would like it noted that she’s not in fact a nationalist!