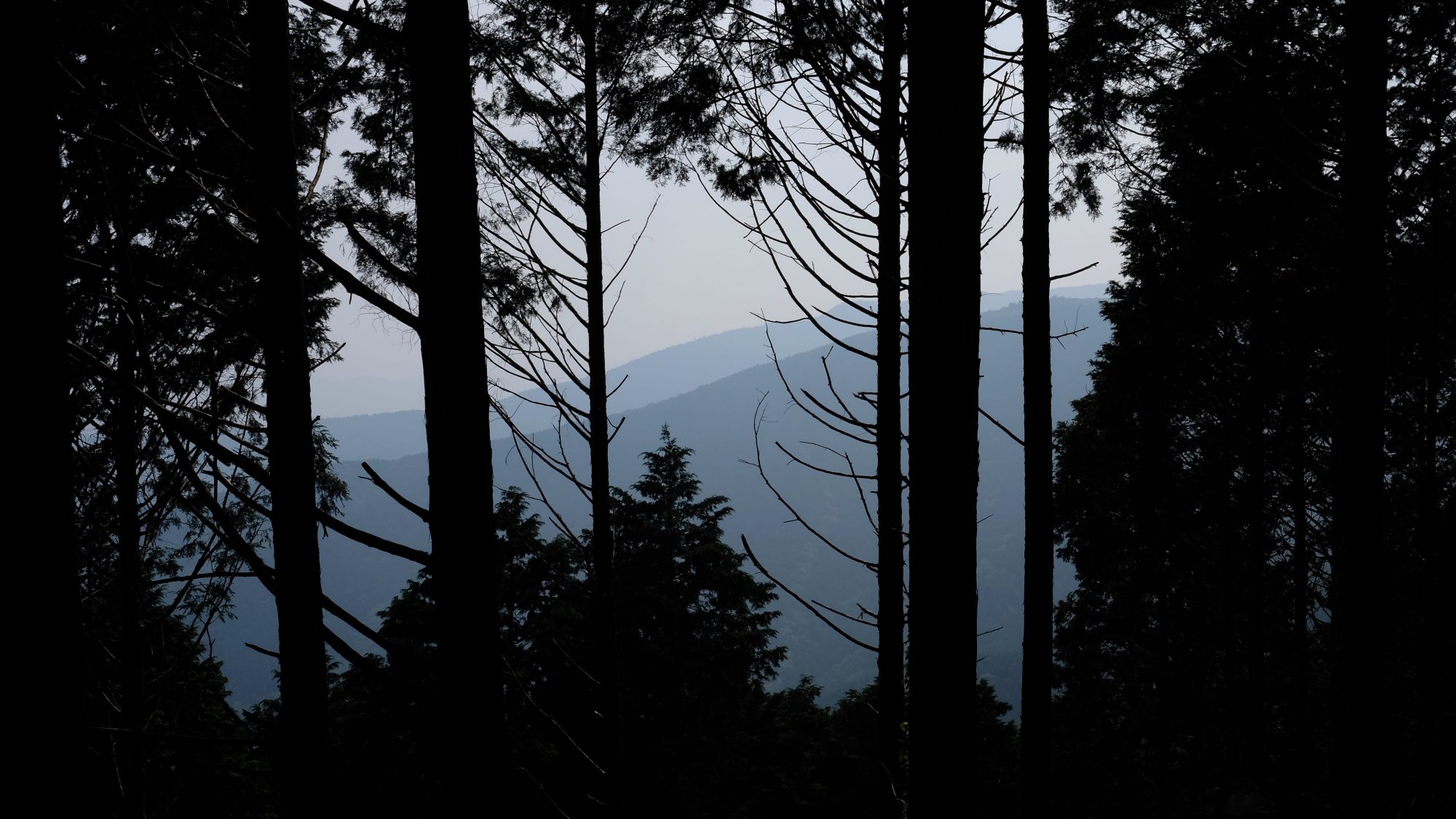 It’s a little difficult to know where to begin with this entry since it was such an epic day; I covered 40km, climbed three mountains, entered a new prefecture, visited temple 40, met some amazing people, and found an incredible place to stay the night. Phew!

Wanting to take advantage of the dry weather, I set off at a spritely hour from Akizawa Business Hotel. A thick mist hung over the mountains that surround Sukumo and the air was humid from the recent downpour.

Following the Matsuo-tōge Pass, the trail immediately began climbing into the mountains, passing through several tiny villages where children were cycling their way to school, all with matching white helmets.

I reached the 300m peak at 8.30am, passing an older henro on the way who looked a bit out of breath. I had just crossed over into Ehime Prefecture and was now on the path to attaining enlightenment (菩提 bodai). Not sure I’m feeling it quite yet!

On the local road towards Ainan Town I passed a small fruit shop where the owners popped out and handed me a couple of oranges as osettai. The day was off to a good start. Instead of heading to the temple directly I decided to get lunch first, tendon (tempura over rice) at Naniwa (なにわ) restaurant, and then stocked up on essential supplies at Lawson for the hike ahead. 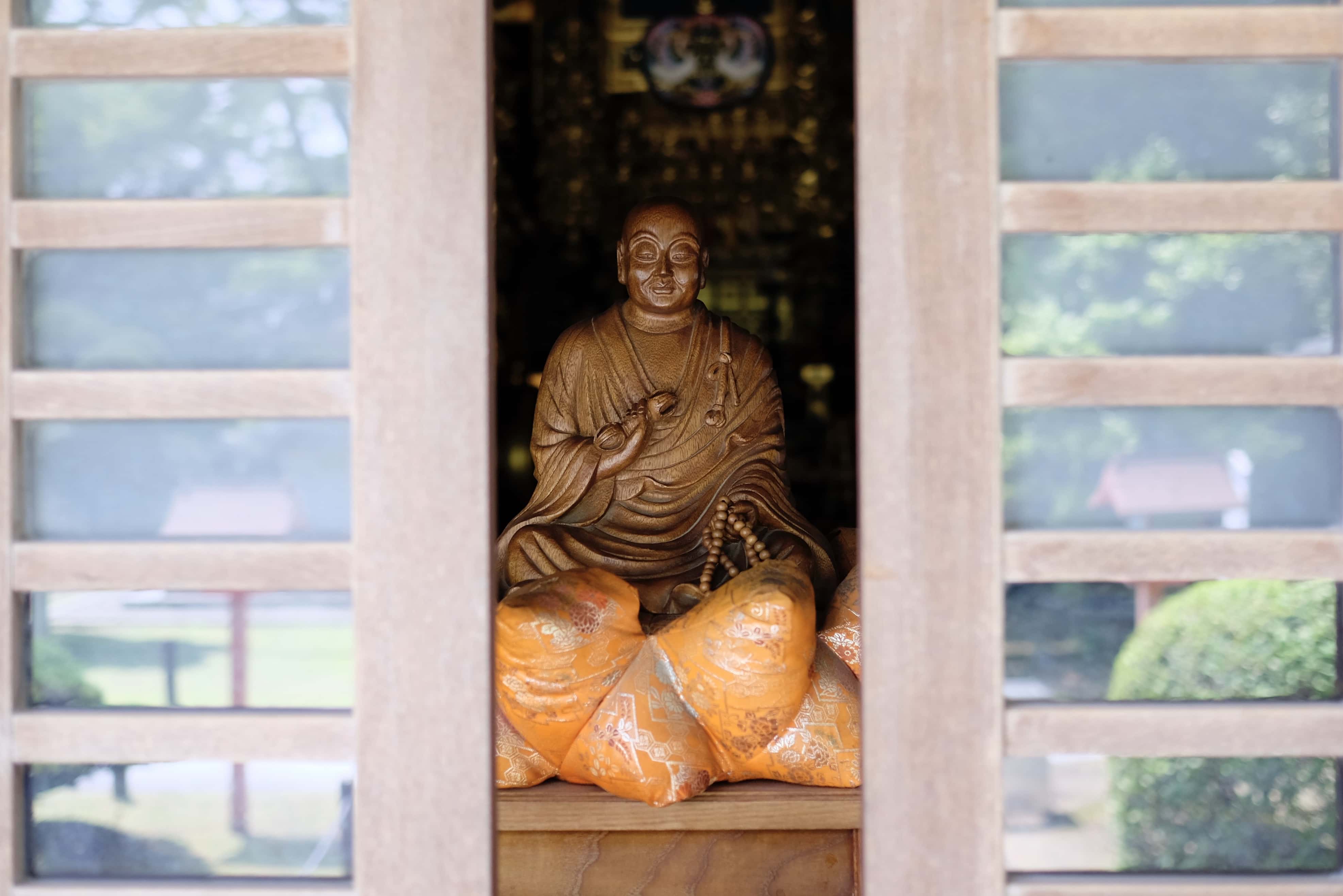 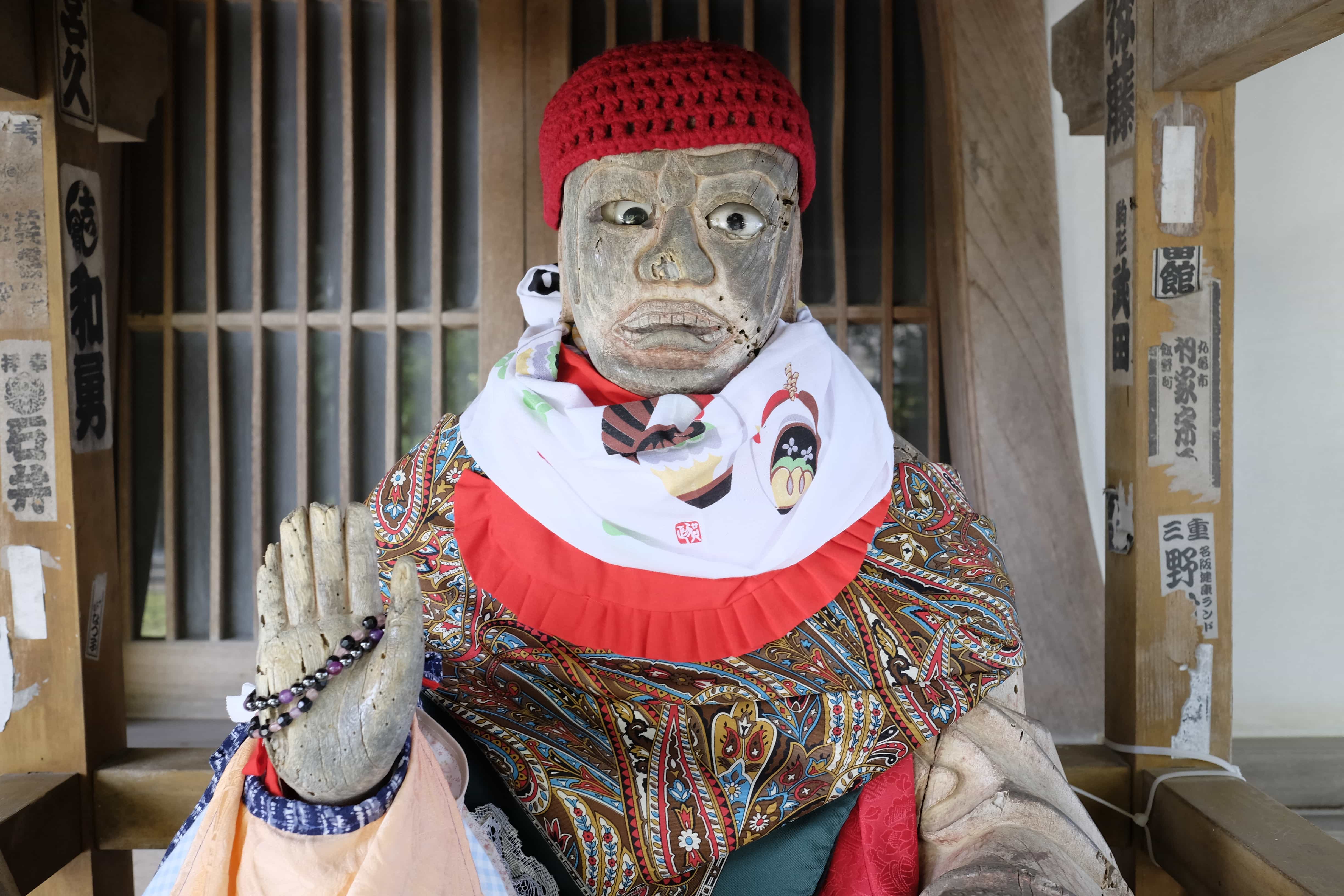 Arriving at Kanjizai-ji (観自在寺 – 40) at 1pm I observed the usual rites before getting my book stamped and signed. 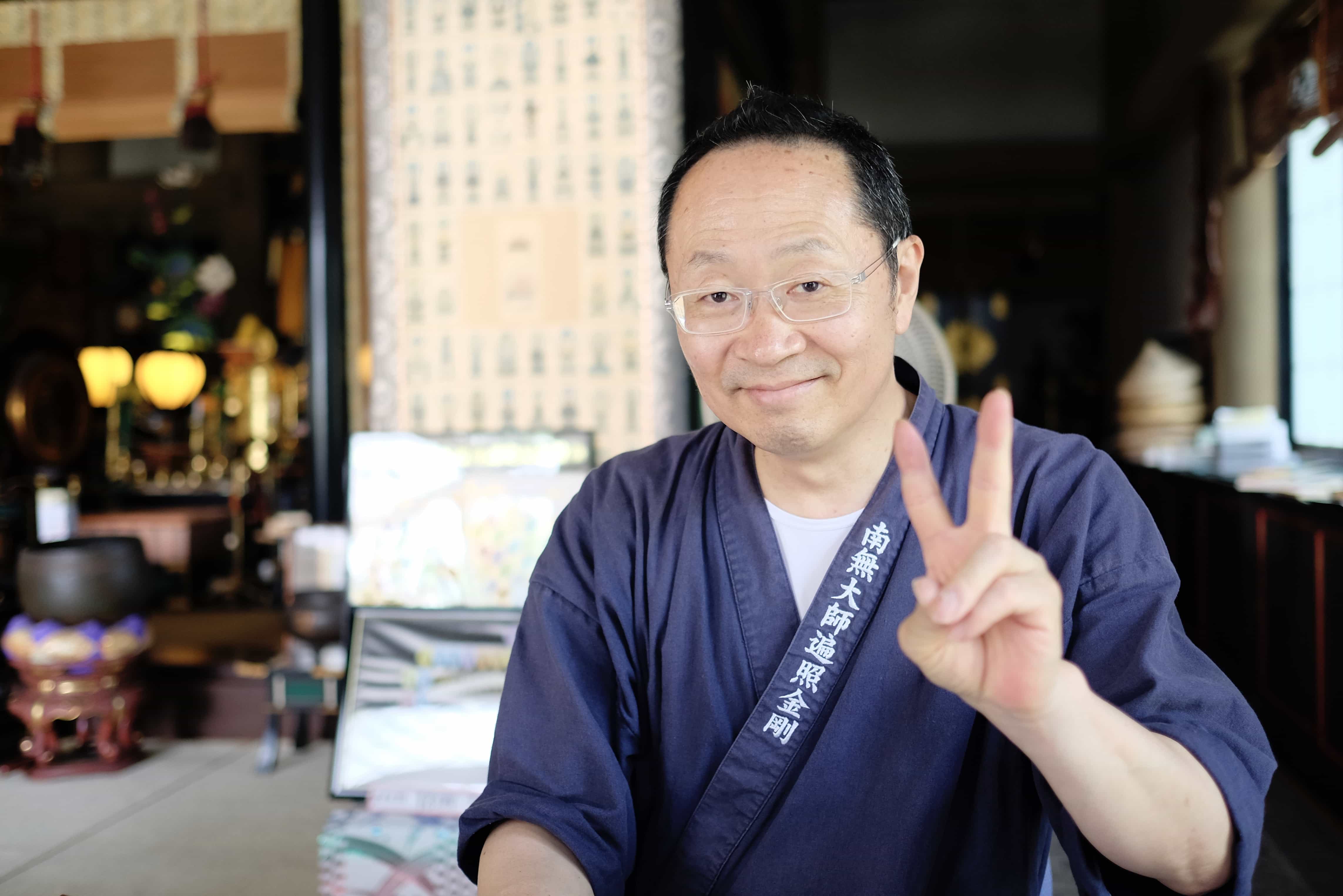 The priest in charge asked me where I was heading next and was shocked to hear I taking the Naka-michi (中道) trail. It’s one of the ancient routes which is known to locals but isn’t in the Japanese guide because it’s considered technically challenging (conservative as usual).

I showed him my English map which has the route and he spent a good five minutes reading it over and muttering his surprise at how detailed it was. He warned me that there would be no food or water available and, although friendly, seemed a little incredulous.

The trailhead is pretty easy to find and I spotted the first official sign at 2pm. Naka (中) means “inside” in Japanese which makes sense when you consider the trail runs through the mountains instead of the normal route while goes around it.

For the first 11km, I followed the Daigandō Pass which ascends 533m before dipping down into Sōzugakko-Mae valley. The trail has been recently cleared but some parts are still a little hard to follow and very steep in sections.

Peeking through the trees there was a stunning view of the hazy mountains beyond. It was a magical feeling to know that I was probably the only person for miles around.

There a number of gated areas that you pass through containing young pine trees. I spotted a wild deer at one point and presumably they want to keep them out.

Reaching the stunning valley floor at 4pm I was worrying that I might not have brought enough water (I had 3 bottles but had already finished 1.5). I shouldn’t have feared because opposite Ōsōzu Shrine I found a vending machine. There might well be more of them than people in Shikoku! 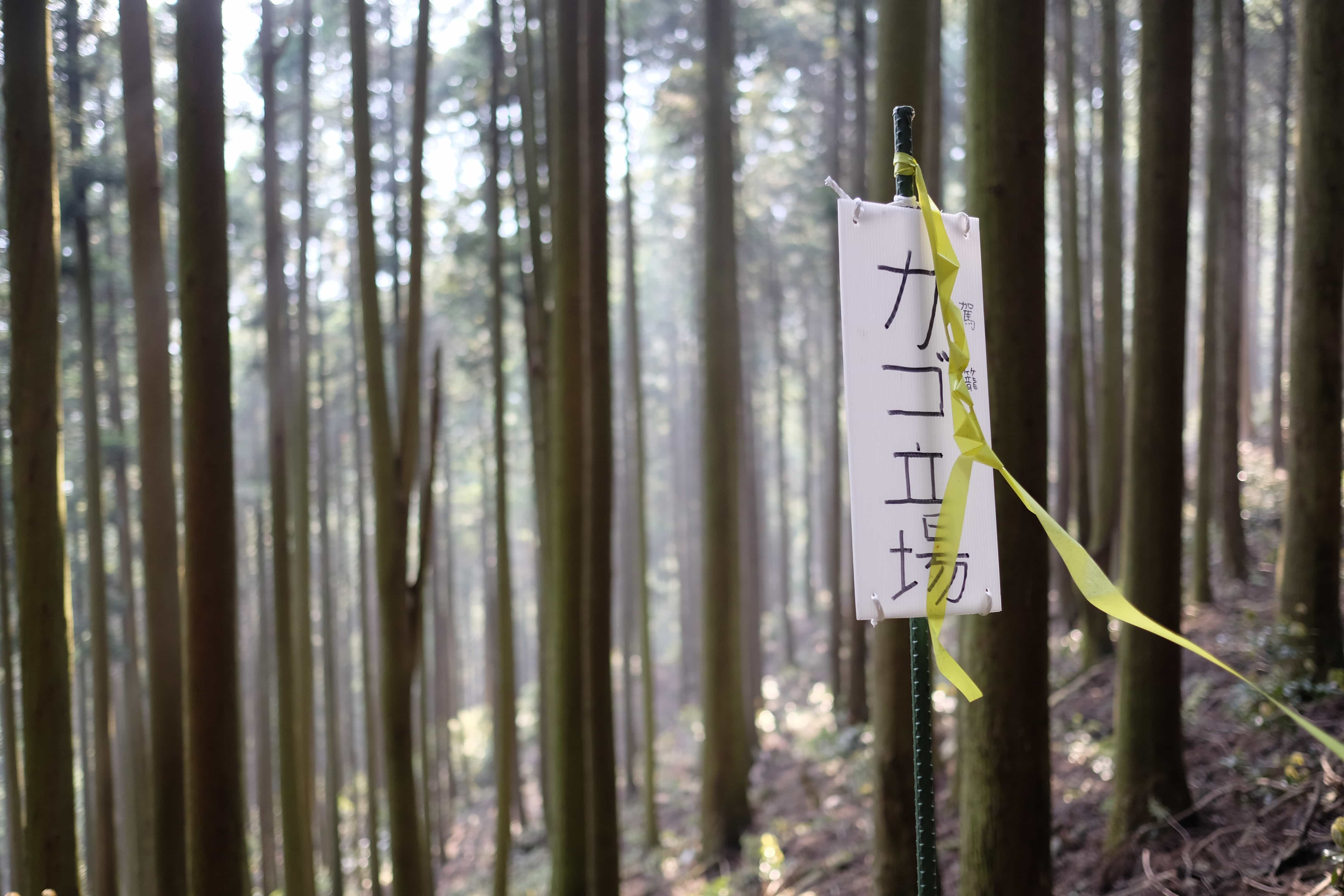 The second accent along the Shōgandō Pass was a little less steep and better defined. At the summit (588m) I passed the enormous wind turbines I’d seen from the below.

A couple of kilometres later I reached the old farm house zenkonyado (free lodgings provided by local people) at 6pm. I’d called ahead to Ōmori-San, who I’d been put in touch with, and lives in the village.

He came out to greet me and show me around as well as to demonstrate how the well pump worked (another first). He generously left me some instant yakisoba for dinner. 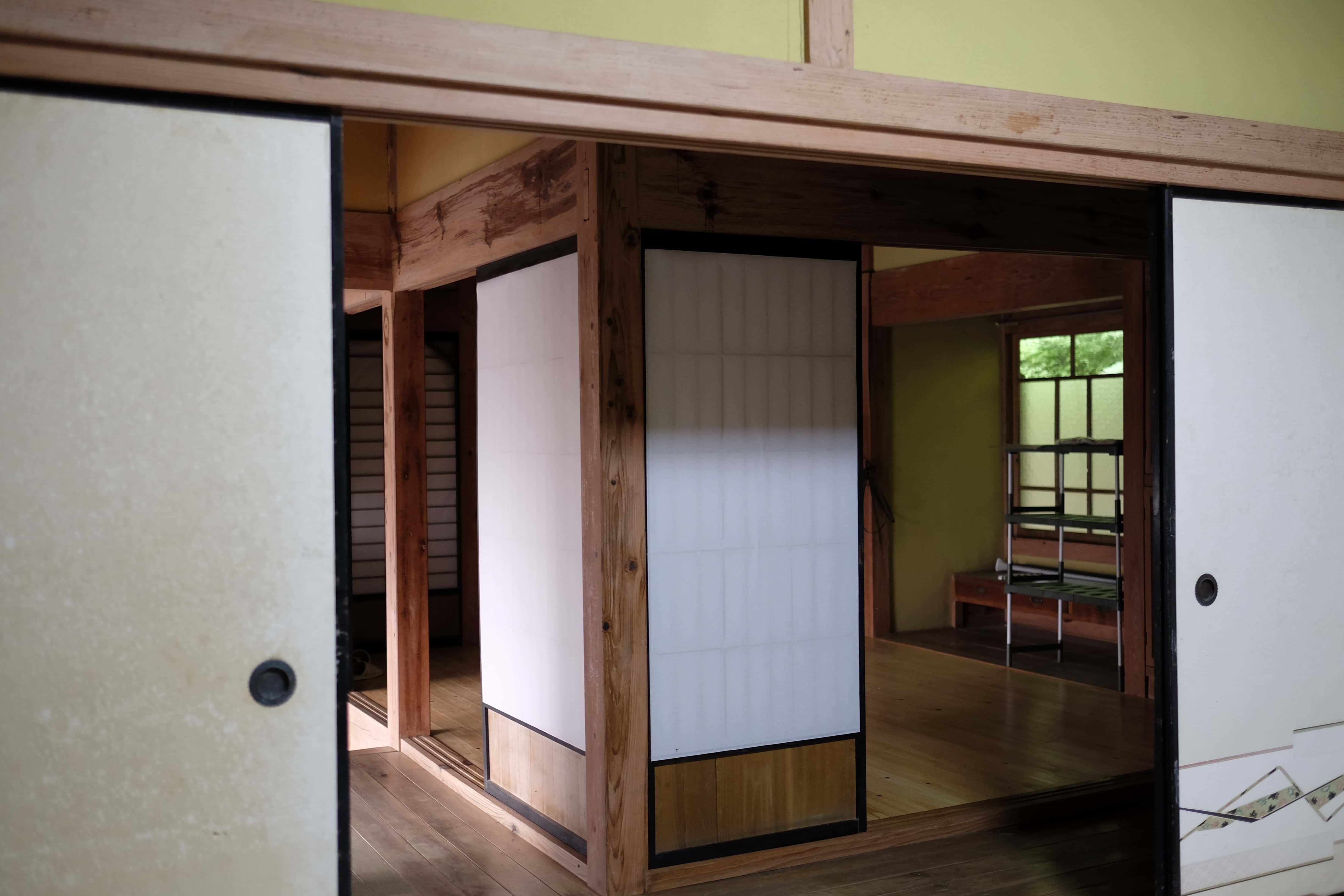 The Henro dojo (へんろ道場) house has an earthen floor at the entrance followed by traditional rooms all separated by sliding doors.

I don’t think the village gets many foreign visitors because before long two adorable old ladies came by to say hello and gave me rice balls for my breakfast tomorrow. One of them was hard of hearing so the other had to scream “he’s from the UK” several times before she got it 🙂

Sitting on the veranda I ate the yaki-soba while enjoying the sunset and reflected on the past week. Somehow, after all the rain, the bad days make you appreciate the good days even more.

After the sun had set I stepped outside to use the privy and was momentarily stunned by the sudden absence of light. All the remained what the incessant chirping of frogs in a field nearby.