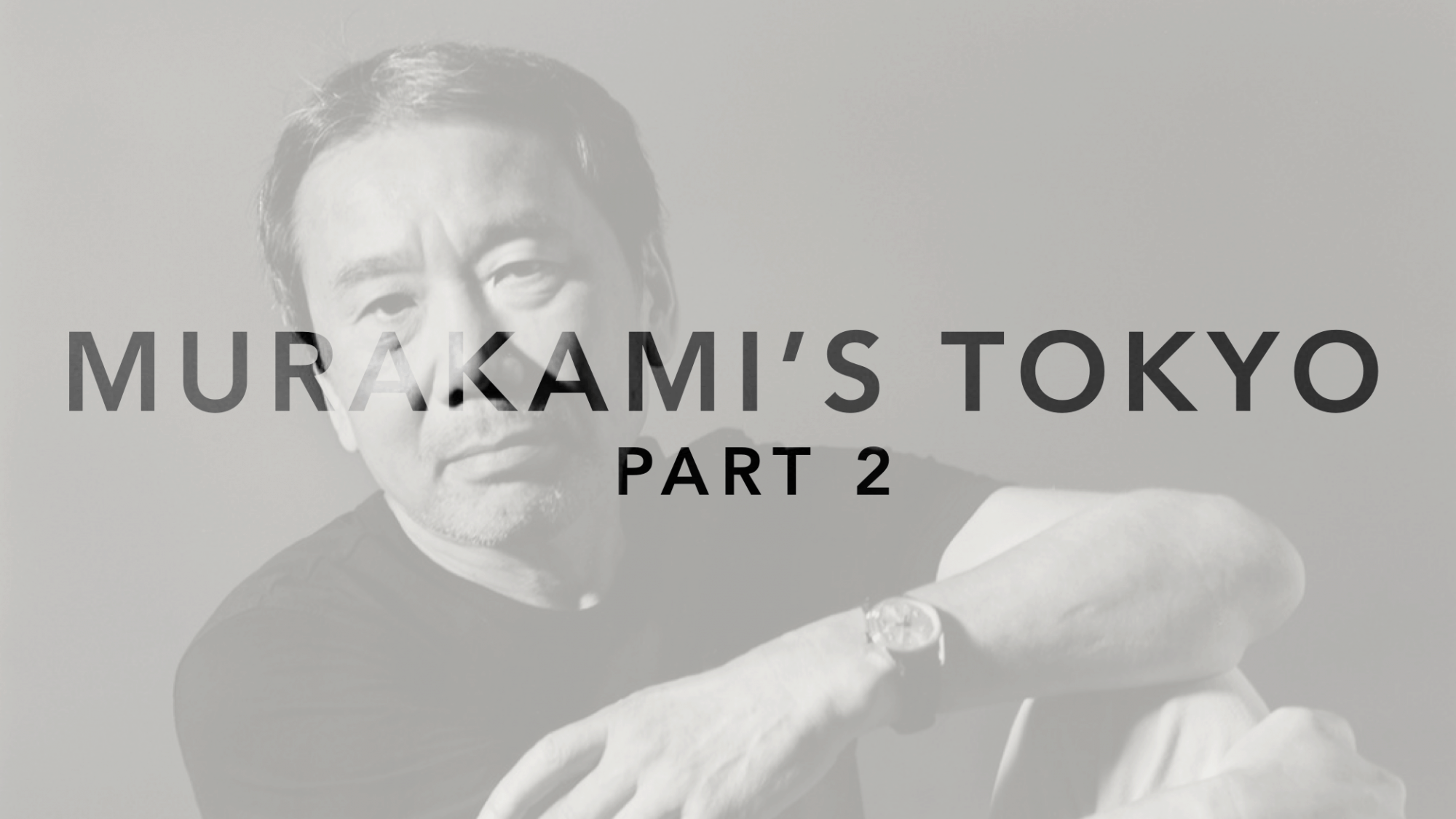 In Part 1 we looked at Murakami’s early life and in Part 2 we visit the jazz cafés/bars that he ran before becoming an author as well as the place he had his epiphany to begin writing. 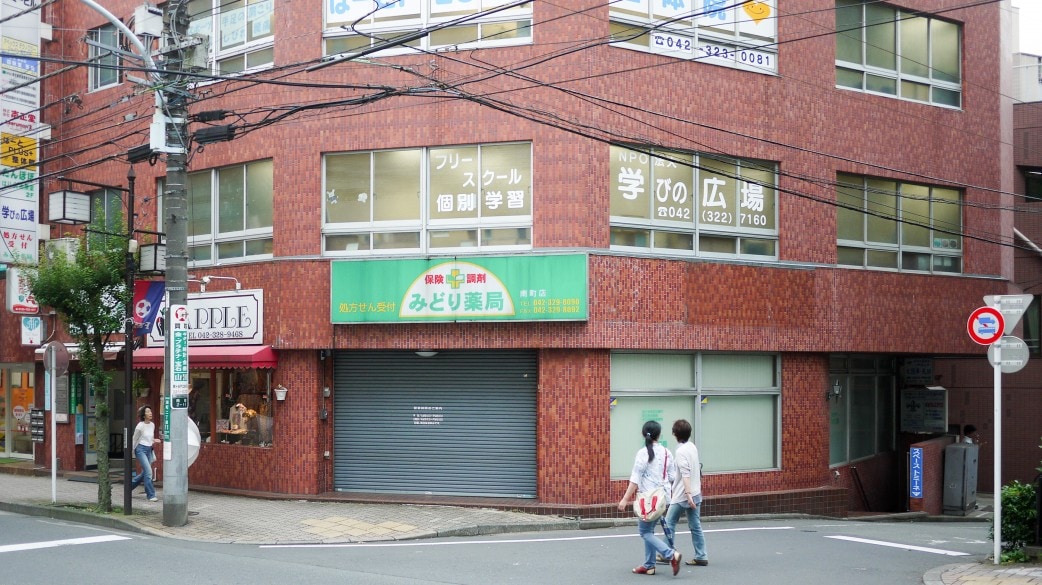 That’s how I came to open an upmarket jazz bar in the basement of a brand-new building in Aoyama. I had worked in a bar at college, so I was familiar with the ins and outs of running a drinking establishment — the kind of drinks and food you should serve, the music and atmosphere, the sort of clientèle to aim for, and so on. My father-in-law’s company handled the interior decorating. He brought in a first-rate interior design firm and set them on to to it. Their price was surprisingly reasonable and when the bar was finished it was a sight to behold.

— South of the Border, West of the Sun

Murakami wasn’t interested in becoming a corporate salaryman and, shortly before graduating, opened a coffeehouse and jazz bar called Peter Cat (named after his old pet) in the suberbs of Kokubunji (国分寺市). Although a long way from the upmarket district of Aoyama, like the protagonist in his later novel South of the Border, West of the Sun, Murakami took a loan from Yōko’s father to help start the business which he ran with her from 1974 to 1977.

Taking the Chuo line thirty minutes West from Shinjuku I managed to track down the site of the original Peter Cat in a bland red-tiled building now occupied by a pharmacy on the ground floor and a ballet studio in the basement where Peter Cat was originally situated. At first I was a little disappointment by the sheer ordinariness of the place but this soon turned to intrigue as I explored the surrounding area. Directly opposite the building is Tonogayato Garden (殿ヶ谷戸庭園), a beautiful traditional Japanese garden laid out in 1913. Centered around a pond, the garden uses the natural terrain of the Musashino Plateau to incorporate many striking landscapes: a spacious lawn on the top, steep slopes, a pond with waterfalls and a bamboo forest at the bottom. 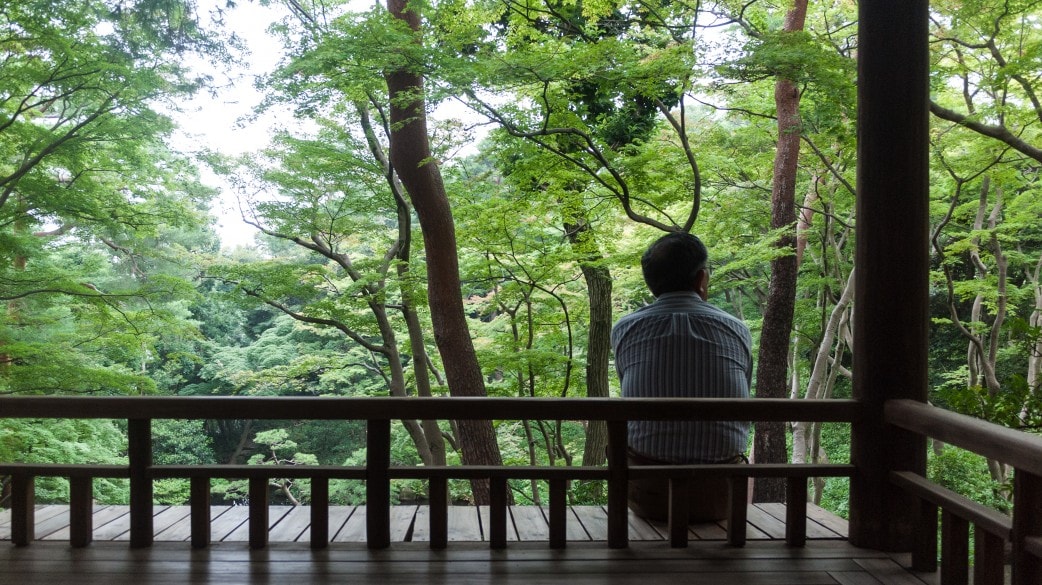 Despite Tokyo’s high population density it always surprises me how easy it is to turn a corner and find yourself alone. While sitting in silence on the veranda of the tea house, overlooking the green oasis, I imagined one of Murakami’s characters lost in their Kafkaesque thoughts as, I too, became lost in mine. 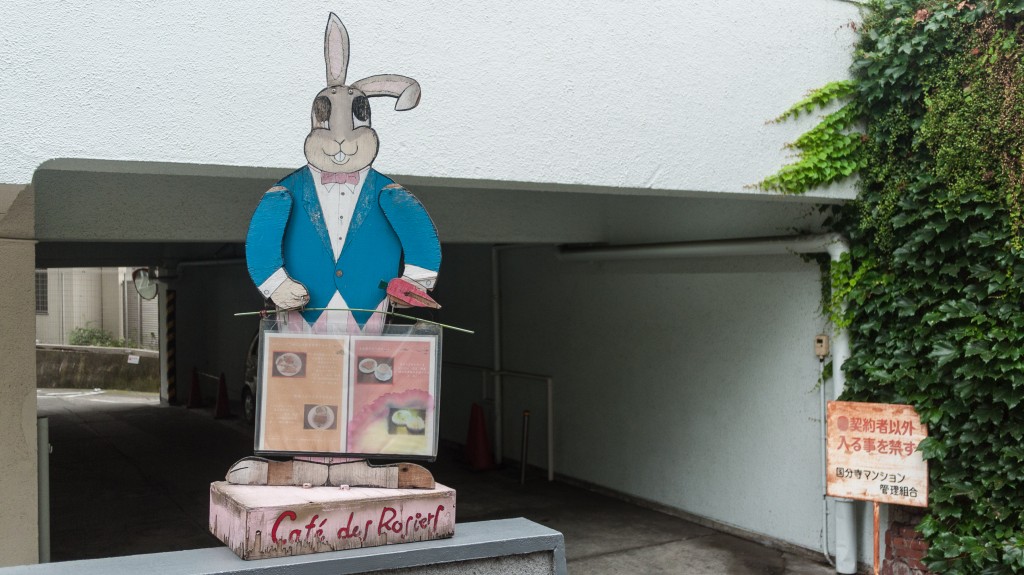 After leaving the garden I noticed a faded sign on the other side of the road in the shape of a rabbit pointing to a subterranean shop. Taking this as a sign to follow Alice down the rabbit hole, I cautiously entered Cafe De Rosieres, and was greeted by a room filled from floor to ceiling with all manner of Art Deco and Art Nouveau miscellanea. 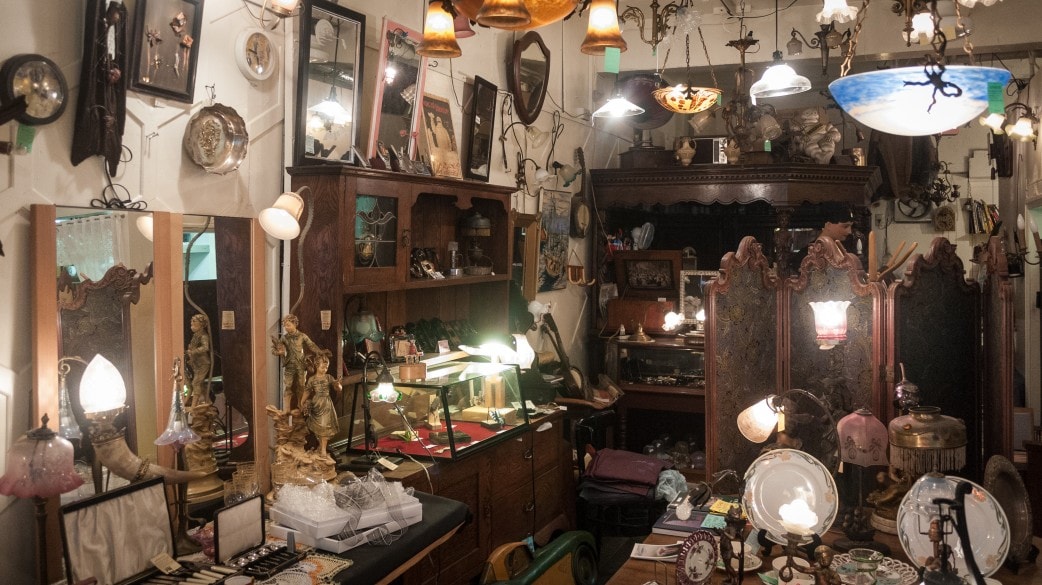 The owner of antique shop-cum-café, an older gentlemen, looked rather perplexed by his foreign visitor but relaxed a little after I ordered an ice-tea and engaged in the limited amount of small-talk that my poor Japanese allows. Like a surreal plot twist in one of Murakami’s books the scene of me sitting there amongst the mounds of antique junk drinking tea from a porcelain cup was verging on the absurd. More than once I glanced outside the window just to check that the real world hadn’t left me behind. 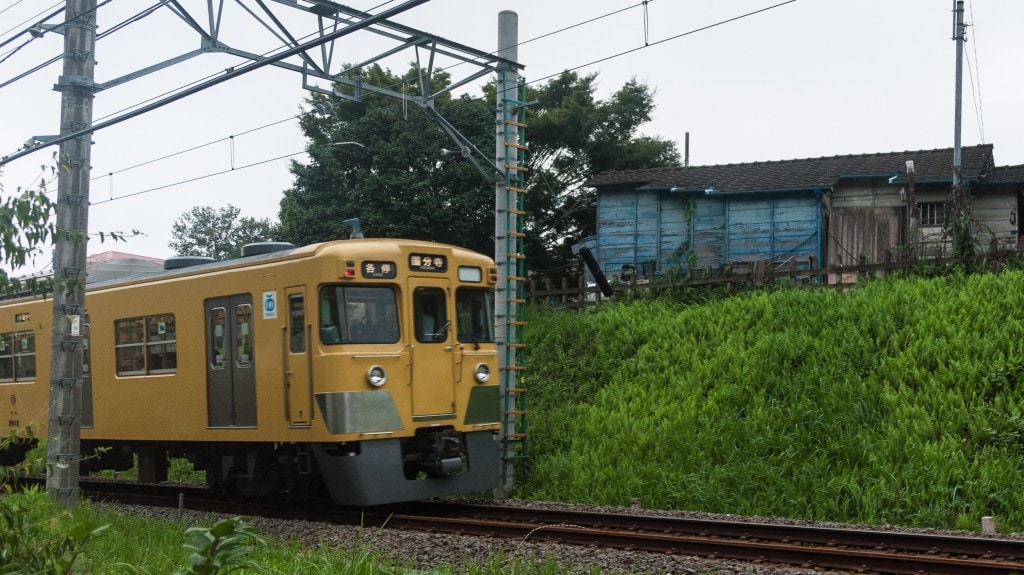 Leaving Cafe De Rosieres, I walked to the west side of Kokubunji where the Murakami’s first lived on an unusual triangular plot of land bounded on two sides by constantly running railway lines (1974 – 1975). Despite the success of the club at the time, they were struggling to make ends meet, and this was as far as their budget stretched. Today an old wooden shack painted blue sits on the cramped and noisy plot. It’s not clear whether anyone still lives there. Not long before, I’d been running a sort of jazz club near Sendagaya Station. It wasn’t so big, or so small, either. We had a grand piano and just barely enough space to squeeze in a quintet. During the day we served coffee, at night it was a bar. We served pretty decent food, too, and on the weekends featured live performances. This kind of live jazz club was still pretty rare back then, so we gained a steady clientele and the place did all right financially. Most people I knew had predicted that the bar wouldn’t do well. They figured that an establishment run as a kind of hobby wouldn’t work out, that somebody like me, who was pretty naive and most likely didn’t have the slightest aptitude for running a business, wouldn’t be able to make a go of it. Well, their predictions were totally off.

In 1977 the Murakami’s moved the club to a new downtown location in Sendagaya (千駄ヶ谷) where they went to town decorating it with cat coasters, cat matchbooks, cat photos, and cat figurines. It was here that he wrote his first two novels; Hear the Wind Sing and Pinball, 1973 (hard to find in English outside Japan). Despite being unable to hide its age, the building still exists today and the first floor is now occupied an Italian restaurant. 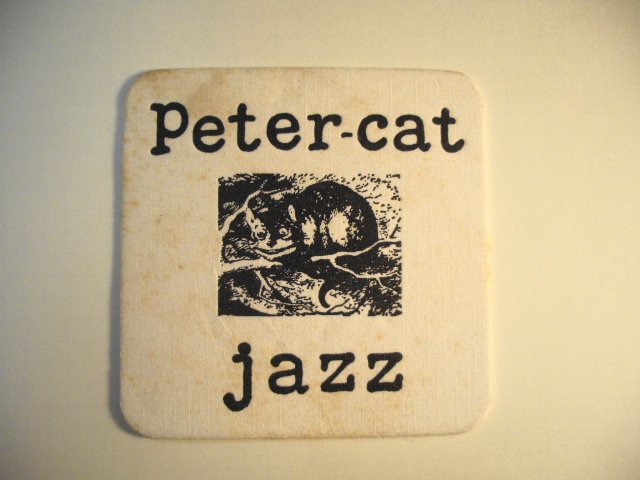 The first time Sumire met Miu, she talked to her about Jack Kerouac’s novels. Sumire was absolutely nuts about Kerouac. She always had her Literary Idol of the Month, and at that point it happened to be the out-of-fashion Kerouac. She carried a dog-eared copy of On The Road or Lonesome Traveler stuck in her coat pocket, thumbing through it every chance she got. Whenever she ran across lines she liked, she’d mark them in pencil and commit them to memory like they were the Holy Writ.

Murakami reportedly owns some 10,000 records and, being immersed in jazz day and night at the club, some of its sense of rhythm and improvisation invariably rubbed off on his work. It’s something which he shares in common with writers like Jack Kerouac who he had also been inspired by at a young age and is mentioned a number of times in Sputnik Sweetheart (1999), a somewhat falorn tale of unrequited love.

Although Peter Cat 2 is gone, just around the corner Book House Yu (ブックハウスゆう) still exists in the same spot its been for over 50 years, and its here were where Murakami and his wife used to buy magazines. Lookout for the hand-drawn labels taped on the Murakami bookshelf drawn by the author himself!

I remember that Yasuda was pitching for the Swallows. He was a short, stocky sort of pitcher with a wicked curve. He easily retired the side in the top of the first inning, and in the bottom of the inning the leadoff batter for the Swallows was Dave Hilton, a young American player new to the team. Hilton got a hit down the left field line. The crack of bat meeting ball right on the sweet spot echoed through the stadium. Hilton easily rounded first and pulled up to second. And it was at that exact moment that a thought struck me: ‘You know what? I could try writing a novel.’

Japan’s love of baseball dates back to 1872 by when it was introduced by an American teacher at a school in Tokyo. It was at Jingu Stadium, a stone’s throw from Peter Cat 2, in 1978 while watching a baseball game that Murakami had the revelation that he could write a novel. What precisely about that game which triggered such a strong conviction isn’t clear but it would change the face of Japanese literature forever. 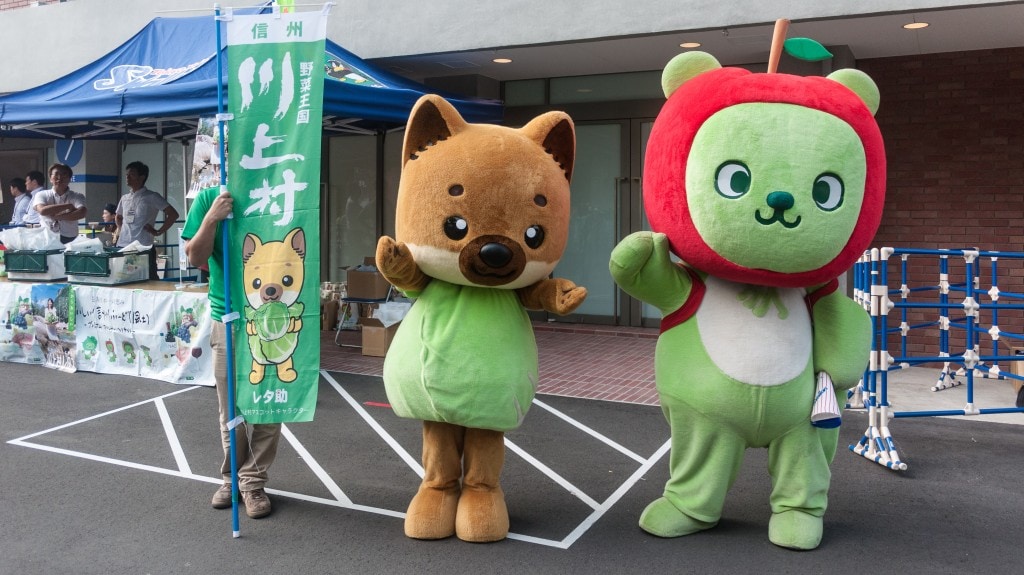 Walking around the perimeter of the stadium, it was clear to see that the fans took it pretty seriously. Most were wearing Yakult Swallows vests and cutesy mascots were aplenty. Having grown up in the UK I’ve never watched baseball and unfortunately on the day I visited tickets were sold out so I’ll be making a return visit. 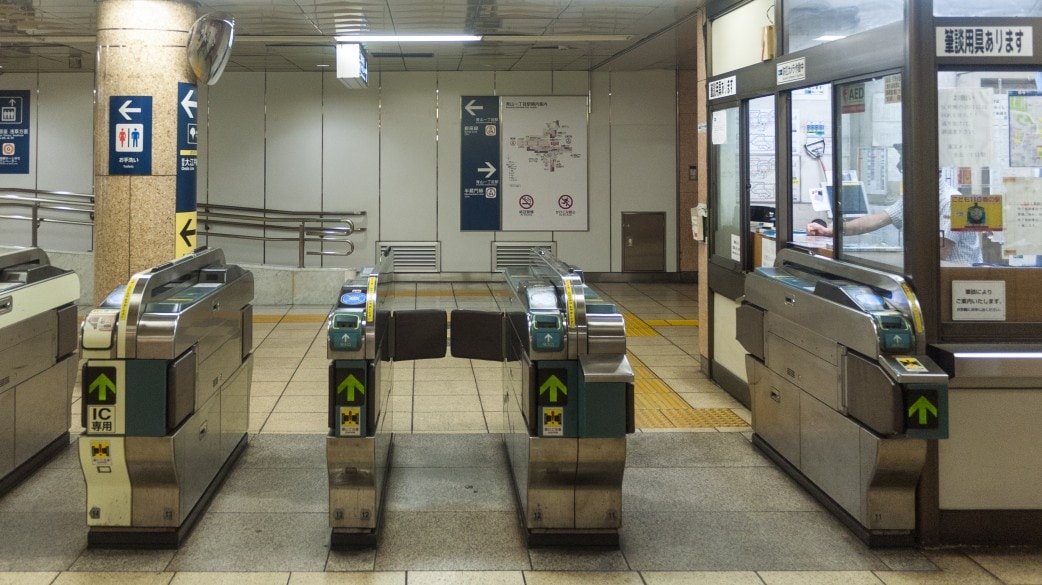 Stepping out from behind a pillar, we mounted the ladder at the end of the platform, nonchalant and disinterested, as if we did this sort of thing every day. We stepped around the railing. Several people looked our way, visibly alarmed. We were covered with mud, clothes drenched, hair matted, eye squinting at the ordinary light – I guess we didn’t look like subway employees. Who the hell were we?

— Hard-Boiled Wonderland and the End of the World

Tokyo’s metropolitan rail networks are as pervasive and efficient as they are deep and crowded. With over 130 lines, 1000 station and 2,000 km of track being ridden by 40 million passengers every day it doesn’t get any denser than this (1 station per 1.6 square mile). Aoyama-itchōme Station is just a five minute walk from Jingu Stadium.

The crazy underground adventure which takes place Hard-Boiled Wonderland and the End of the World (1985) shows us Murakami at his most fantastical. However, when it’s protagonists emerge from the sewers at Aoyama-itchōme and a jobsworth attendant is unable to comprehend that they don’t know the correct fare, we get a glimpse into the comically absurd aspect of Japanese culture as well as Murakami’s lighter side.

Join us again tomorrow when, in Part 3, we explore some of the favourite meeting spots of Murakami’s characters.