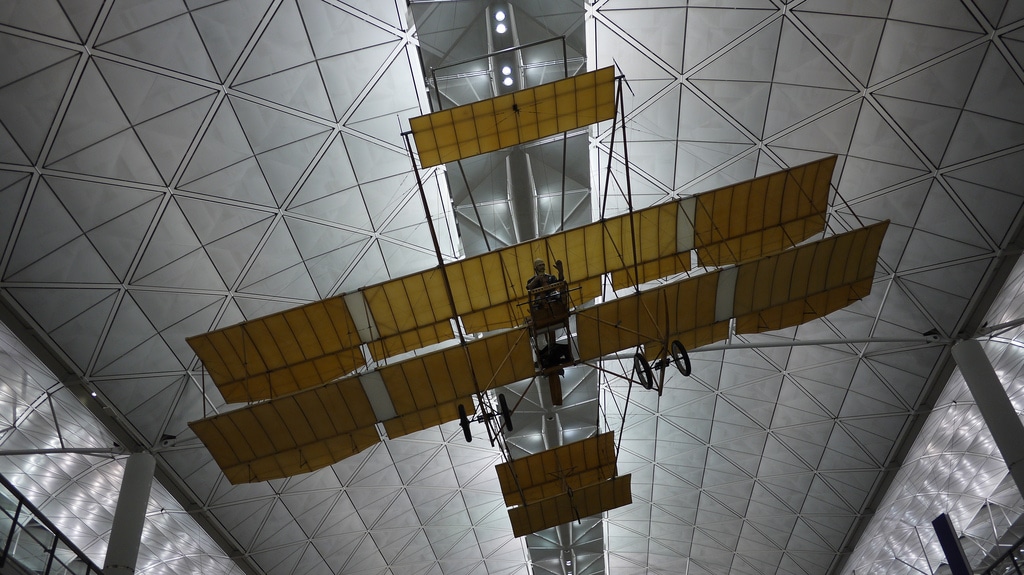 Airports are usually places we pass through and rarely linger unless forced by delays or cancellations. They are designed to facilitate a logical flow of people through their many channels and layers of security as efficiently as possibly with the end goal of departure or arrival. As a certain Tom Hanks found out, when you end up living at one the situation is rather different. 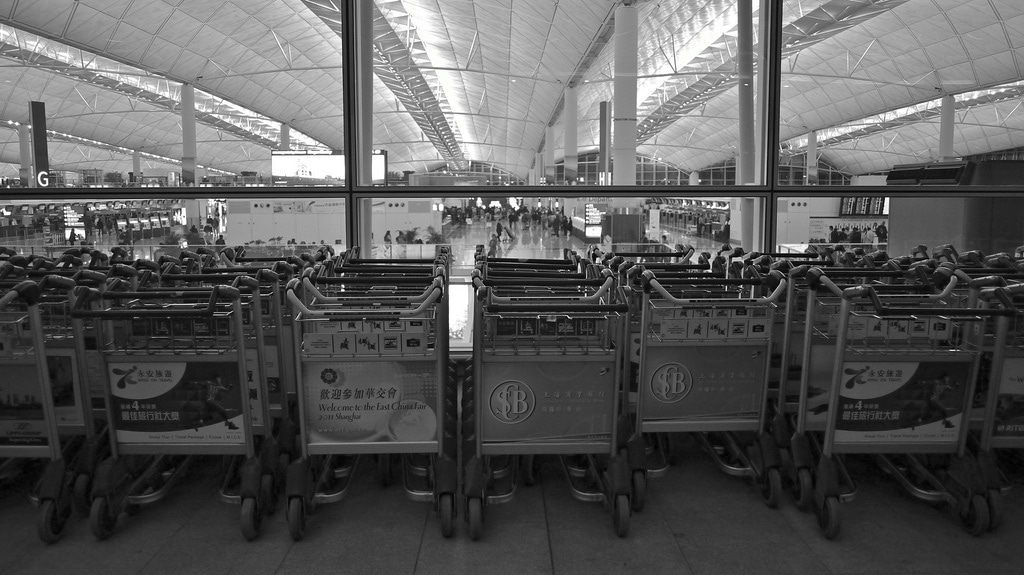 While I may not technically be living inside an airport I am living in a hotel attached to an airport (Hong Kong International to be precise) and this has lent itself to certain observations; the first being that you probably wouldn’t want to. 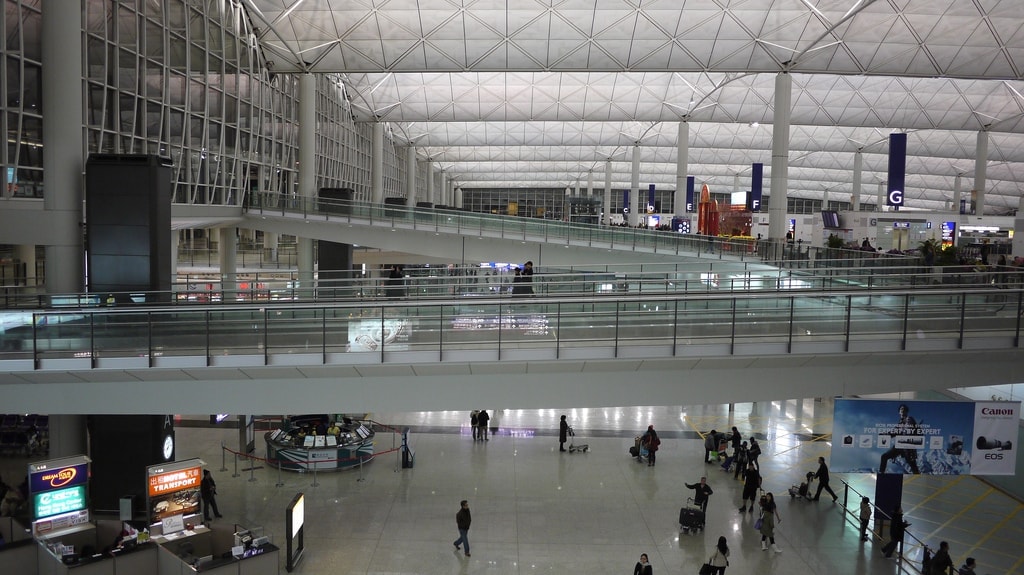 Living at the airport feels like being stuck in some perverse never-ending business trip where you’re constantly held in a state of limbo between work and travel without getting much of a glimpse of what’s going on outside. It’s not that the airport is an unpleasant place, it’s just not somewhere you’d ever call ‘home’. 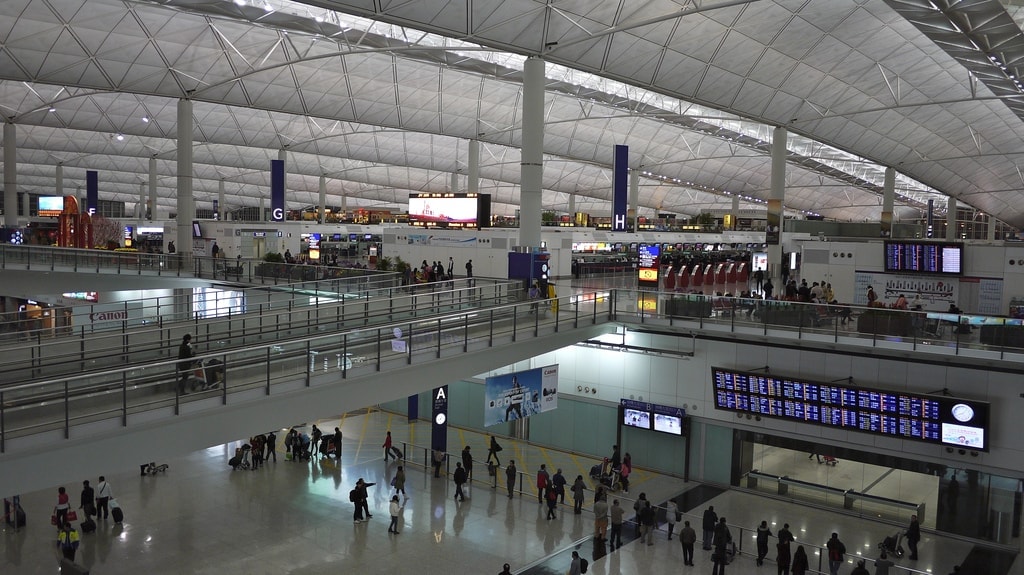 If I had chosen to be stuck at any airport though it probably would have been this one. Having been built on reclaimed land off Lantau Island, HKIA – colloquially known as Chek Lap Kok Airport (赤鱲角機場), is an impressive structure that was designed by Foster + Partners and opened in 1998. The airport has two levels – departures on the top with arrivals below. 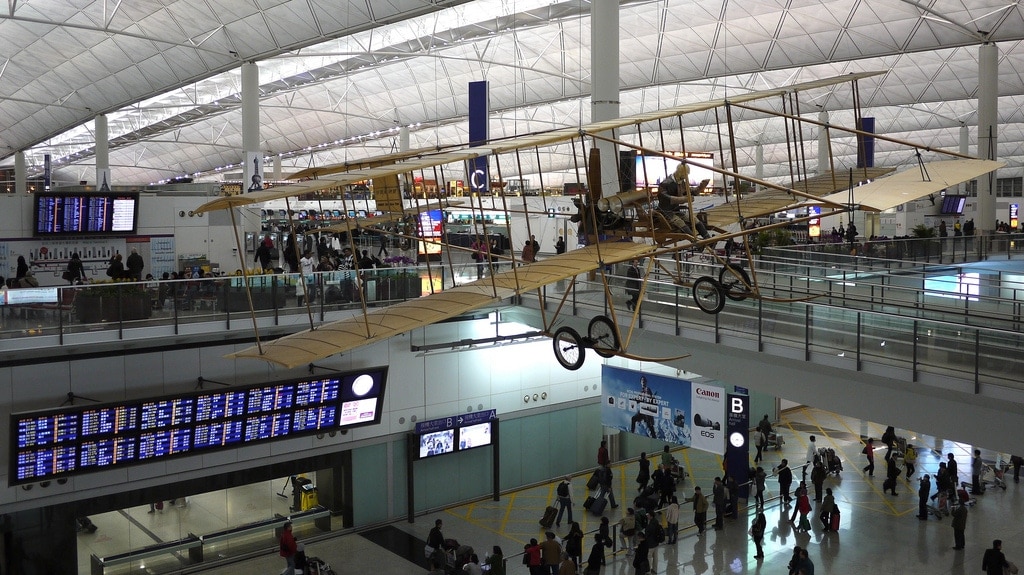 Hanging above the entrance is what looks like a replica of an early Wright Brothers flyer. Below people wait for their loved ones to come through the baggage reclaim hall. This is where I met my parents when they first came to visit me in 2009 – it was all the more exciting for my mum since it was the first time she had left Europe. The airport is open twenty-four hours a day and it looks awesome at night when the stunning ceiling is lit up. Because the area is susceptible to typhoons the end windows are designed to break in extreme situations and neutralise the air pressure thus preventing collapse. 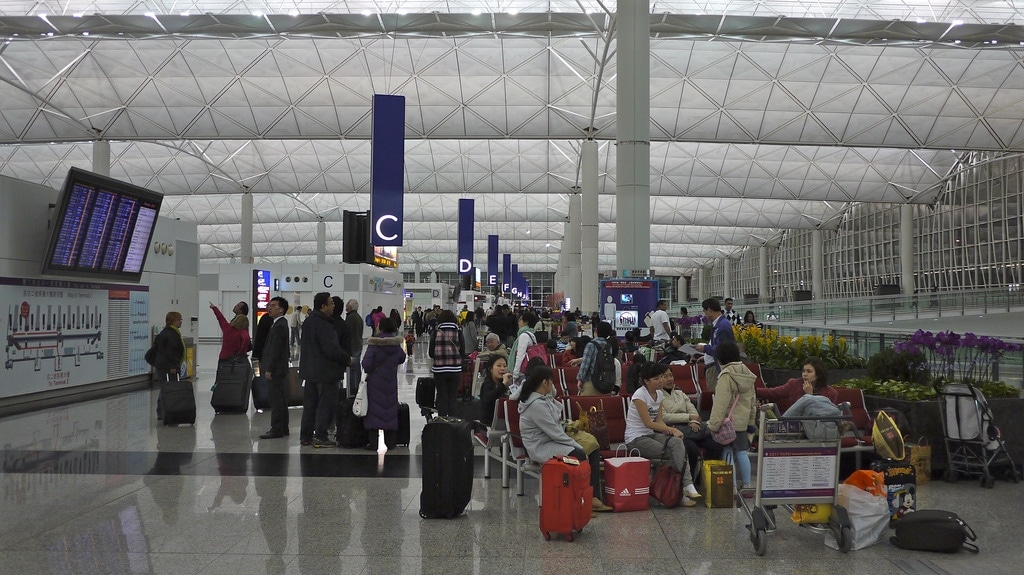 For people who have arrived too early to check-in there isn’t much alternative than to wait it out. One thing that I’ve learnt from frequent travelling is to always carry as little as possible. The golden rule is that when in doubt leave it behind. 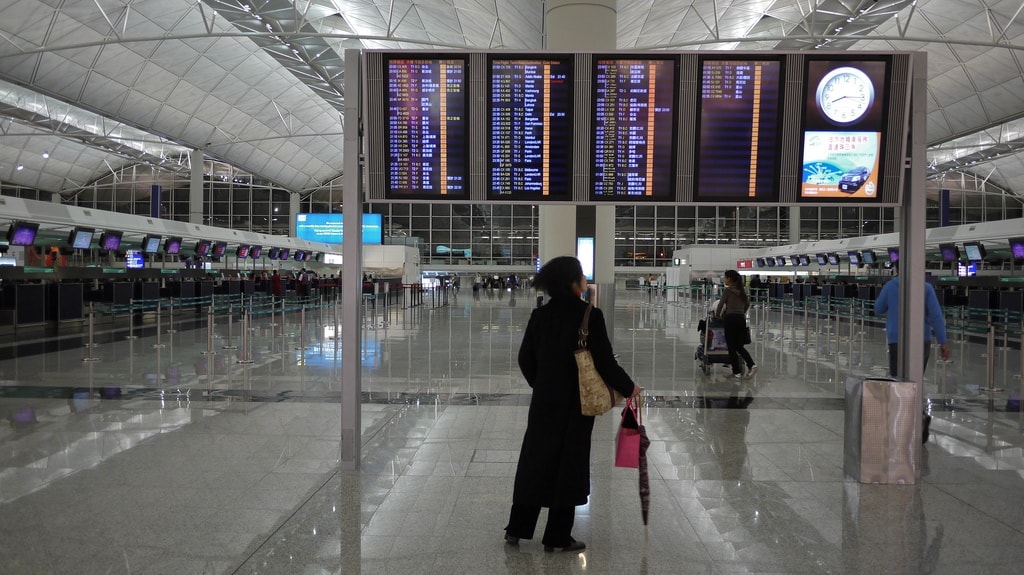 It’s worth noting that the airport has ranked in the top three airports in the world for the past ten years and from personal experience it definitely deserves it. Compared to the national disgrace of London Heathrow its heaven. All day long you’ll find long queues of people waiting to check-in. Getting stuck behind people with over-sized baggage can be a severe pain – always better to check you’re not carrying too much before getting to the airport. 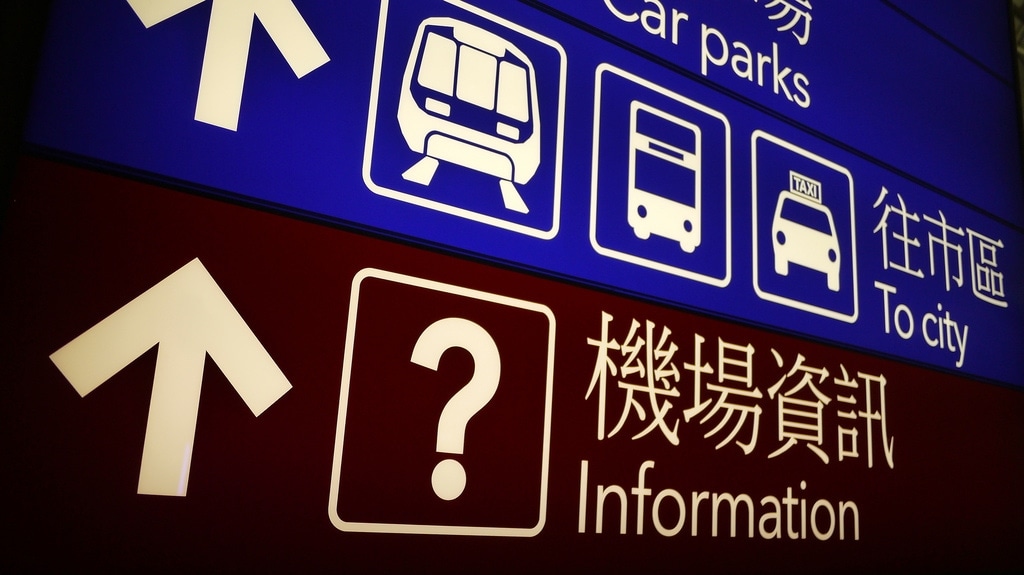 Nearly all airports have their signage in both the local language and English plus simple pictograms. Being Hong Kong, the English used is proper British English – it always makes me smile to hear the announcements pronounced in such a well spoken way 😉 Another shot of the amazing monochromatic roof at night which covers 570,000 m² of floor space. You’ll notice the whole thing is made up of triangles for extra rigidity and ability to expand/contract with changing temperatures. The smaller Terminal 2 can be reached from T1 via an underground walkway. 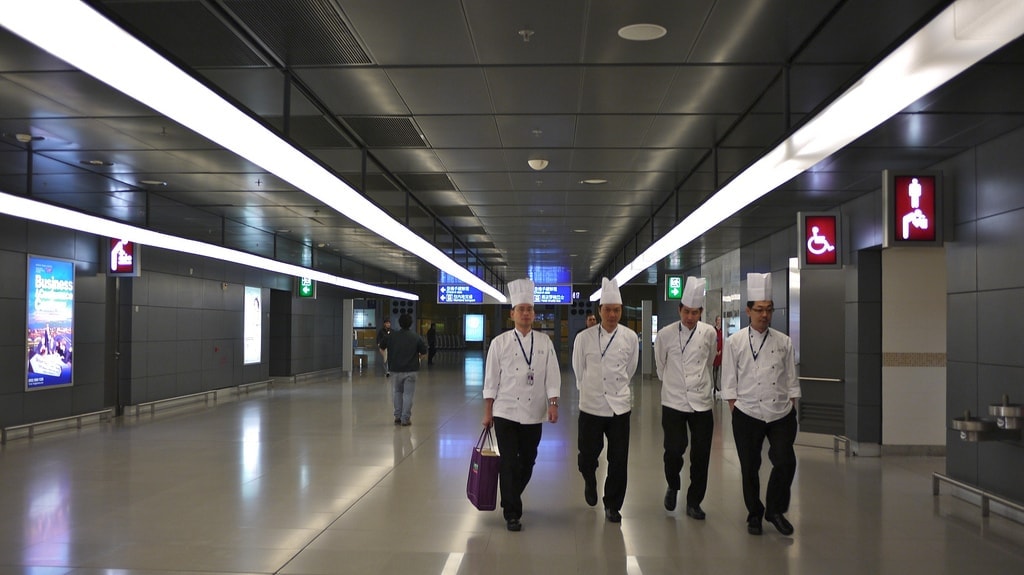 On my way though I passed a bunch of chefs presumably leaving at the end of their shifts. Keeping the 100,000+ people who come through the airport each day fed is no small job. The airport employs a staggering 60,000 people to keep things moving. Terminal 2 has another cool roof which gently undulates like a soft wave flowing across the sky. It can be a long walk getting from one end of the airport to another so there are plenty of travelators to take the strain off your feet. I’m always tempted to try to run backwards but suspect security would not be amused. All of the photos above were taken with my new Panasonic Lumix GF2 Micro Four Thirds camera which I recently brought to replace my LX3. So far it seems like a worthy successor and I’ll be posting a fuller review once I’ve had a chance to play with it a bit longer (and escaped the confines of the airport!).