Slowly roasting yourself alive has never really appealed to me but having heard good things about the highly popular family saunas (Jjimjilbang) in South Korea I decided to give it a try on the Wednesday evening. 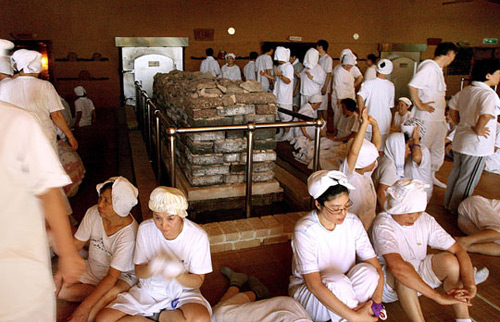 N.b. All the photos in this post were found on Google

Upon arrival you are given light cloth uniforms (blue for boys, pink for girls) which you get changed into then head for the general relaxation area where you’ll see both young and old lounging around on the wooden floor watching TV, playing games and some just having a nap. Off the main area there are various hot and cold rooms of varying temperatures, from the mild to the extreme, as I was soon to be made painfully aware. 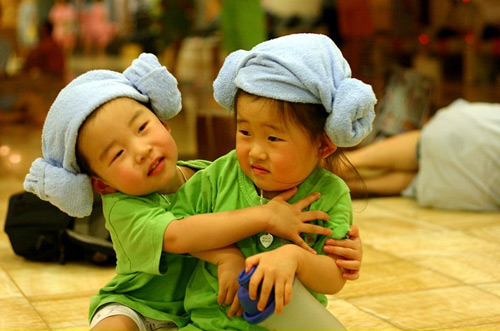 Starting of in a 30 degree room lined with reflective foil tiles it seemed fairly pleasant, just like a hot summers day, but this was just the warm up. After about 10 minutes I moved into a 60 degree brick built room shaped like a conical furnace and was immediately hit by the intense heat. Now I could see why they give you a small towel to mop your forehead with! The people around me seemed to be far more accustomed to this; some were lying down seemingly asleep while others were sitting around having a chat with their friends and families. After about 15 minutes I decided it was time to get out (before I passed out) and headed for the marble-lined cool room. When I was feeling a back to normal I had a wander around and explored some of the other rooms, one full of salt, another lined with sweet smelling pine tree logs and an “oxygen” room which I assume had higher O2 levels. It was then that I noticed a small door in the corner of the main area… 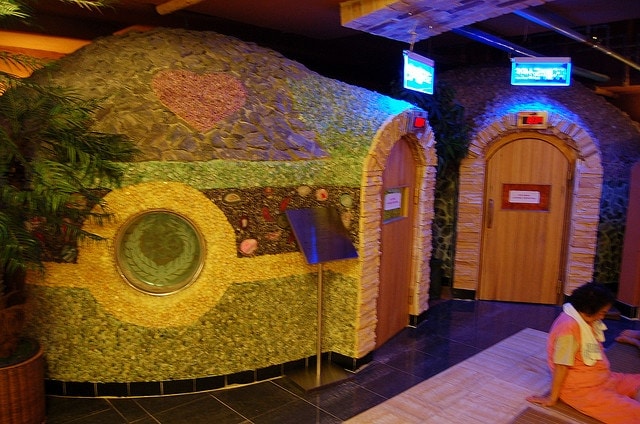 Looking more like a dungeon than a sauna this room was dimly lit and I was well informed that it was kept somewhere between 80 to 90 deg C!! Figuring that I had to try it at least once I ventured cautiously inside. To say it was hot would be an understatement, it was suffocatingly burning hot. I instantly felt my heart rate increase and the beads of sweat began forming like some sort of strange unavoidable osmosis. The natives were clearly finding my feeble presence amusing, especially when I turned my towel into a sheep head. I’m rather glad I couldn’t understand what they were saying in this instance! 5 minutes of this torture was enough so I swiftly headed for the ice room which was a welcome relief!

After all this I felt surprisingly relaxed and refreshed which I’m sure is why many Koreans visit them frequently, some even treating them like a second home (they are open 247). Read more about them here which includes details of the best in Seoul.