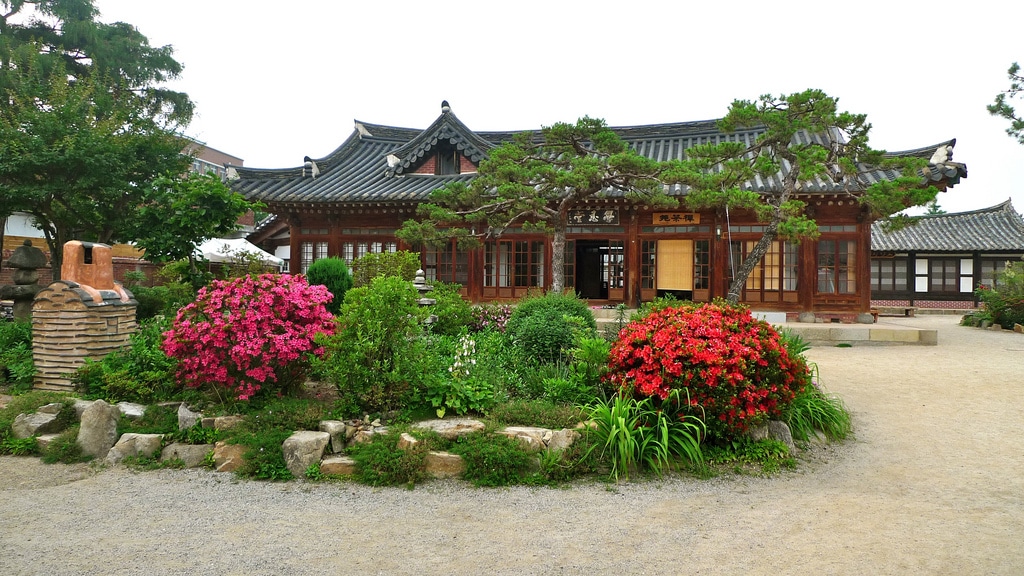 Last week I took an impromptu but much-needed holiday to South Korea. While I hadn’t expected to return to Korea this year the time and price were right so I decided to go for it and took a midnight flight from Hong Kong to Seoul arriving 5am in driving rain. Not the best start perhaps but from there on in things went decidedly uphill…

After stopping off in Seoul for a shower and a tasty breakfast I met up with some friends and we took a bus south to the city of Jeonju (in Jeollabuk-do province) famous for its historic buildings and food culture. The journey took about 3 hours on a comfortable coach which luckily saw the rain steadily turn to sunshine.

After arriving in Jeonju we immediately took a taxi to our accommodation which turned out to be one of the main highlights of the trip – a beautiful Hanok (traditional Korean house) in the peaceful surroundings of a small village filled with other traditional buildings (old and new).

We were welcomed by the kindly proprietor, a descendant of the original owner, who showed us to our room and introduced the area. This particular Hanok, named Hakindang, built in 1905 clearly had some interesting history behind it and is one of the oldest in the village.

Despite the site being about 1/4 the size it was originally the buildings retain many of their original features such as direct heat transfer under-floor heating (ondol) and outside ovens built into the space below the raised wooden floors.

The garden was especially beautiful with a rockery, pond and various small bonsai-like trees all artfully arranged within the courtyard between the main gate and the internal buildings. I was longing for somewhere to relax and at that moment in time it felt pretty much like heaven.

Next to the pond was a deeply recessed natural cave which had been used for decades to naturally refrigerate kimchi (a fermented cabbage side-dish served with almost everything in Korea). I took a look inside but it turned out to also be home to a large population of spiders so I didn’t stick around!

The rooms were simply furnished with a thin futon mattress to sleep on. If you’re not used to sleeping on hard surfaces then you may find this a bit uncomfortable to begin with but it’s something you soon get used to and is apparently very good for your back! Rooms start at 60,000 WON (£35) per night making it quite affordable.

The doors, windows and walls were lined with Hanji (Korean traditional paper) which is lubricated with bean oil making it waterproof and breathable (as well as aesthetically pleasing). Hanji craftwork is a local speciality in Jeonju which I’ll talk more about in a later post.

The large main hall building in the center of the grounds is where the owner lives and she was kind enough to show us around inside – a huge treat.

Above is the main room which was traditionally used for entertainment performances but is today used for holding tea ceremonies and other cultural activities. The walls and furniture are all beautifully hand-made from natural materials with many period pieces of furniture.

Especially impressive was this Korean lacquerware cupboard inlaid with mother-of-pearl (nacre) which is world-renowned for its ingenuity to retrieve the iridescent color from abalone shells to create such exquisite motifs on the surface of hard wood. Such pieces, known as “najeon chilgi“, have long been regarded as a luxurious items symbolising wealth and nobility.

Apparently during the Japanese occupation of Korea (1910 – 1945) richer families who lived in houses like this were spared the harsher treatment others received due to their higher position in society and the Japanese desire to gain their cooperation.

Among many of the interesting items in the house was this early Victor Phonograph from the US made around 1910 which amazingly still in working order. I managed to take the short video above which can give you some idea how it sounds today – sorry for the rather poor quality.

Unique for its time the Victrola had an internal horn with doors which could be opened and closed in order to increase or decrease the volume. I particularly liked the classic manufactures logo on the underside of the top lid featuring a dog peering into the horn.

We were also taken into the spacious attic which was also filled with many curious objects from times past including her grandfathers possessions and text books from when he studied in Japan. The house is a veritable treasure trove of the last 100 years of Korean history.

I enjoyed my visit here so much that it almost feels like something I want to keep secret but at the same time glad to be sharing it and hopefully giving some inspiration for those considering their own visit. I’ll be posting a lot more about Jeonju in the coming days.