Went to the first Anime society meeting of the term this evening. We watched a great (but exceedingly depressing) film called ‘Grave of the Fireflies‘ (Hotaru no haka) which is a story about the struggle of two children to survive during World War II. 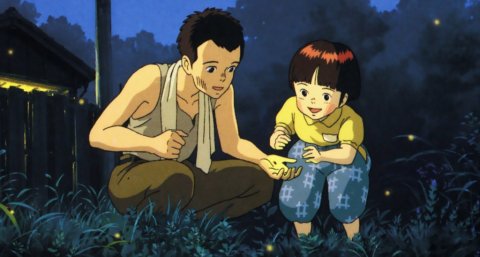 The story revolves around Setsuko and Seita who are brother and sister living in wartime Japan. After their mother is killed in an air raid they find a temporary home with relatives but after quarreling with their aunt they leave the city and make their home in an abandoned shelter. I won’t say much more about the plot-line as it would spoil it if you haven’t already seen it but needless to say not all stories have happy endings. It works particularly well in highlighting the plight of ordinary people and serves as an good illustration to how during conflict it is usually the innocent who suffer the most.

After this light beginning to the evening we met all the new freshers who had joined – I think some of them looked a bit bemused by the whole experience! We then voted on what series to watch this term which I would mention but I can’t remember what they were (someone enlighten me please!). As a side note, hearing someone speaking Japanese with a slight Scottish accent was fairly amusing, weather the person in question is aware of this I’m not sure! It reminded me of school language lessons where people were speaking French with a heavy Norfolk accent – hilarious 😉

In slightly less interesting news… Had my first ‘Distributed Computing‘ lecture today, unfortunately the lecturer didn’t exactly bring much enthusiasm to the subject which wasn’t very inspiring but anything beats what we had to put up with last year in certain quarters (hint hint).